NOAA scientists are studying the effectiveness of shellfish aquaculture for nutrient removal around the Long Island Sound. Credit: NOAA

Declining water quality from excess nutrient inputs, called eutrophication, is an issue of concern in estuaries and coastal waters around the world. These nutrients enter near-shore waters from land, typically from urban stormwater and fertilizer runoff and treated sewage outputs. The environmental consequences of eutrophication range from low levels of oxygen in water (hypoxia) and loss of fisheries habitat to harmful and nuisance algal blooms and loss of seagrasses. Resource management efforts to reduce nutrients in coastal waters focus on regulation of the land-based sources of nutrients. A new study from NOAA and EPA evaluated the feasibility and potential of bioextraction (nutrient removal) directly from the water through the cultivation and harvest of shellfish as a complement to traditional land-based measures.

Recent research has shown that both the cost and removal efficiency of nitrogen through shellfish aquaculture compare favorably to removal by existing agricultural and stormwater Best Management Practices (BMPs). Shellfish cultivation and harvest is also a means of sustainable domestic seafood production. 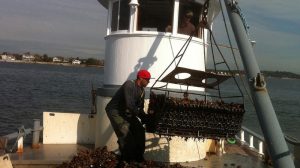 In order to determine the amount of nitrogen removed from Long Island Sound (LIS) and Great Bay Piscataqua Estuaries (GBP) each year by the oyster aquaculture industry at current production levels and under a future expansion scenario, a diverse project team of scientists from NOAA, EPA, universities, local governments and private companies combined local and system-scale models of those ecosystems with models of shellfish growth and nitrogen removal. The models took into consideration areas available for future aquaculture development and current eutrophication conditions, developed a new Eastern Oyster model, and used an economic analysis to determine the value of the ecosystem service provided by the oyster aquaculture industry.

The model outputs found that bioextractive removal of nitrogen in LIS and GBP through shellfish aquaculture currently removes less than 2 percent of total nitrogen inputs. Expansion of shellfish aquaculture could lead to removal of up to 3 percent of total nitrogen inputs. But the value of the estimated nitrogen removal services the aquaculture industry is providing to LIS is estimated to be $267.4 million and could grow to $545 million if production were expanded. The value of the nitrogen removal services that the current oyster industry in GBP provides annually is $1.1 - $1.3 million. If production acres were to expand to the maximum area suitable for aquaculture, the range of values would increase to an estimated $4.3 - $5.0 million.

"Shellfish aquaculture can directly improve water quality, while also providing a sustainable source of seafood," said Mark Tedesco, Director of the Environmental Protection Agency's Long Island Sound Office. This study shows that bioextraction through aquaculture can be a win-win for the environment and the economy.

"The importance of these results is not limited to LIS and GBP, they will benefit ongoing discussions of nutrient management and seafood production in many US coastal areas as well as other countries that are struggling with similar coastal nutrient pollution issues."said Dr. Suzanne Bricker, project coordinator from NOAA's National Centers for Coastal Ocean Science. "The project team is grateful to the EPA and NOAA for supporting this innovative work."