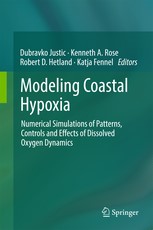 Coastal hypoxic zones continue to increase more rapidly since the 1960s, with currently 600-plus documented hypoxic zones in estuarine and coastal waters worldwide. Hypoxia causes lost habitat and the spatial displacement of plankton, large invertebrates, and fish; it often associates with mass mortalities of marine organisms that live on or near the bottom. Besides a widespread environmental problem, coastal hypoxia influenced by riverine inputs attracts socioeconomic and political interest because of its association with agricultural fertilizer activities in the watershed. Scientists expect 1) increased demands to predict ecological responses to hypoxia to quantify the ecological benefits and costs of management actions, and 2) heightened attention to simulated effects of coastal management and climate change in terms of direct relevance to managers and the public. Numerical models can provide the needed information for understanding hypoxia and ensuring effective management, and this book provides a snapshot of representative modeling analyses of coastal hypoxia and its effects.

The editors broadly organize 15 peer-reviewed chapters around three main topics:  1) Modeling of the physical controls on hypoxia, 2) Modeling of biogeochemical controls and feedbacks, and 3) Modeling of the ecological effects of hypoxia. The final chapter is a synthesis chapter that draws generalities from the earlier chapters, highlights strengths and weaknesses of the current state-of-the-art modeling, and offers recommendations on future directions.