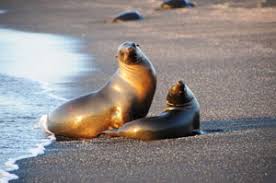 California sea lions are at risk of the bacterial disease Leptospirosis, cased by Letrospira, which can lead to liver and kidney damage, and death. Credit: NOAA

Leptospirosis, a bacterial disease spread through urine, is a zoonotic disease and left untreated can cause liver and kidney damage, and death. Periodic outbreaks of Leptospira have occurred in California sea lions causing morbidity and mass mortalities along the Pacific coast. The Biomere mobile real-time PCR thermocycler is a rapid test to be used in the field in order to detect emergent leptospirosis epizootics quickly. NCCOS scientist David Wu, based in Charleston, developed the methods and validated that Leptospira can be detected within one hour of analyzing urine samples, a considerable advantage over having to ship samples and wait for results. Similar tests using blowhole swab samples from stranded dolphins collected during necropsies at NCCOS Charleston were run for detection of Brucella and Morbillivirus, two diseases that have been implicated in mass mortalities of dolphins, demonstrating the possibility of detecting multiple pathogens of concern, including Morbillivirus in the critically endangered monk seal.