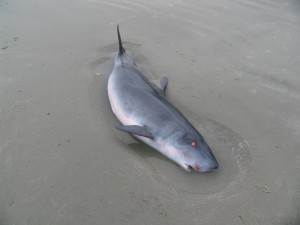 A recent study found the presence of heavy metals in the kidney and liver tissues of dwarf sperm whales (Kogia sima) stranded along South Carolina's coast. As long-lived high trophic level predators, dwarf sperm whales are exposed to environmental contaminants from anthropogenic sources and may serve as an indicator of offshore marine pollution.

Between 1990 and 2011, twelve stranded dwarf sperm whales were recovered from the SC coast, making it the third most frequently stranded marine mammal in South Carolina. Analysis results showed concentration ranges for 22 metals for different age classes of both genders. These concentrations were within the ranges reported for the more commonly stranded marine mammal, the bottlenose dolphin (Tursiops truncatus), which also showed age-related accumulation of cadmium and mercury.

Marine mammals are exposed through diet to environmental contaminants, including metals, originating from anthropogenic sources. Mercury, lead, and cadmium are of particular concern due to their toxicity potential, atmospheric dispersion, and biomagnification through the food chain. Further studies will be needed to assess the ecotoxicological hazards associated with the presence of metals in dwarf sperm whale tissues.

This project was a collaboration of NCCOS and the SC Marine Mammal Stranding Network and was recently published in Marine Pollution Bulletin as 'A survey of trace element distribution in tissues of the dwarf sperm whale (Kogia sima) stranded along the South Carolina coast from 1990 -2011'.