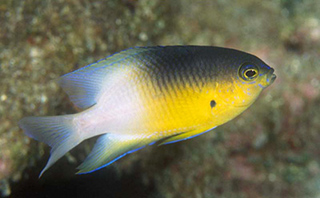 The bicolor damselfish, Stegastes partitus, is a common reef fish in the Gulf of Mexico and Caribbean Sea. It grows to about 10 cm in length and has a depth range of 0–100 meters (330 feet). Credit: Joyce and Frank Burek.

The project, led by the University of Miami, investigates the role that mesophotic reefs may play in replenishing key fish species, such as grouper and snapper, and other organisms in the shallower reefs downstream in the Florida Keys National Marine Sanctuary and Tortugas Ecological Reserve. This is particularly important for management of species under considerable commercial and recreational fishing pressure.