Measuring Parasites and Disease in U.S. Oysters and Mussels 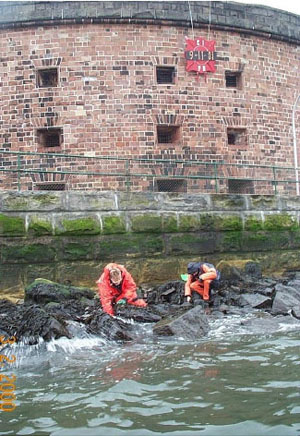 Mussel Watch samples mussels and oysters from over 300 sites around the coastal U.S. and the Great Lakes. The site pictured here is at the base of the Statue of Liberty in New York Harbor. Credit: NOAA

NOAA today released its first-ever long term report of the national distribution of parasites and disease in mussels and oysters, concluding that there was no general threat to oyster and mussel population in the nation's coastal waters at the time of the study, despite some locations along the Gulf of Mexico and West Coast with elevated rates of parasite infection and disease.*

As the only continuous coastalmonitoring program of these sentinel species that is national in scope, the MWP provides a unique and unparalleled opportunityto determine national, regional and local perspectives of the health of our coastal ecosystems. Thisbaseline information isvital for determining degrading conditions as environmental stressors, including climate changeand other natural and human-causeddisasters,continue to impact coastal resources.

TheNS&T MWP uses oysters and mussels as sentinel organisms to monitor the health of ournation's coastal and marine waters, including Alaska, Hawaii, Puerto Rico, and the Great Lakes. The program, whichbegan in 1986 with 145 monitoring sites, today encompasses over 300 coastal locations nationwide, where bivalvesare collected and measured for contaminant concentrations (organic compounds and metals).