Recent research has shown that ocean acidification and low oxygen interact to harm early life stages of bay scallops (Argopecten irradians) and hard clams (Mercenaria mercenaria). The study, conducted by Stony Brook University and sponsored by NCCOS and NOAA's Ocean Acidification Program, found that the combined effects of low pH (high acidity) and low oxygen led to higher rates of death and slower growth in shellfish than by either factor alone. 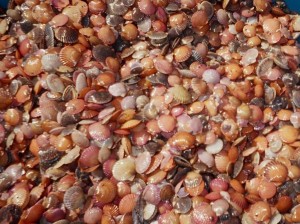 In young scallops, both ocean acidification and hypoxia (low oxygen) alone reduced survivorship by greater than 50 percent, but the two stressors combined produced even greater negative outcomes. In young clams, ocean acidification slowed growth more than hypoxia. Older clams were resistant to hypoxia or acidification separately, but experienced reduced growth rates when exposed to both conditions simultaneously. The findings show that the consequences of hypoxia and acidification for shellfish are more severe than would be predicted by either individual stressor and should be considered together when assessing how ocean animals respond to these conditions, both today and under future climate change scenarios.

The results are reported in the open-access science journal PlosOne.

NOAA and EPA Work Together to Address Climate Change