A bottlenose dolphin calf in the Gulf of Mexico. Credit: NOAA.

Animals living in coastal waters can face a number of environmental stressors—both from nature and from humans—which, in turn, may have compounding effects. This may be the case for marine life in the Gulf of Mexico which experiences both oil spills and the presence of toxic algae blooms.

Marine sentinels, like bottlenose dolphins in the Gulf of Mexico, share this coastal environment with humans and consume food from many of the same sources. As marine sentinels, these marine mammals are similar to the proverbial "canary in the coal mine." Studying bottlenose dolphins may alert us humans to the presence of chemical pollutants, pathogens, and toxins from algae (simple ocean plants) that may be in Gulf waters.

Texas Gulf waters, for an example, are a haven for a diverse array of harmful algae. Additional environmental threats for this area include oil spills, stormwater and agricultural runoff, and industrial pollution.

Recently, we have been learning about the potential effects of oil on bottlenose dolphin populations in the Gulf of Mexico as a result of the Deepwater Horizon oil spill in April 2010. Dolphins with exposure to oil may develop lung disease and adrenal impacts, and be less able to deal with stress.

Certain types of algae produce toxins that can harm fish, mammals, and birds and cause illness in humans. During harmful algal blooms, which occur when colonies of algae "bloom" or grow out of control, the high toxin levels observed often result in illness or death for some marine life, and low-level exposure may compromise their health and increase their susceptibility to other stressors.

However, we know very little about the combined effects from both oil and harmful algal blooms. 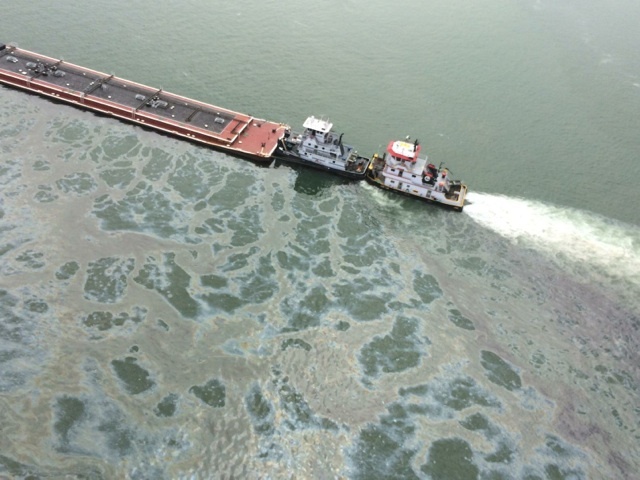 When Oil and Algae Mix

Studying marine mammal strandings and deaths helps NOAA scientists and coastal managers understand the effects of harmful algal blooms across seasons, years, and geographical regions. We know that acute exposure to algal toxins through diet can cause death in marine mammals, and that even exposures to these toxins that don't kill the animal may result in serious long-term effects, including chronic epilepsy, heart disease, and reproductive failure.

But in many cases, we are still working to figure out which level of exposure to these toxins makes an animal ill and which leads to death. We also don't yet know the effects of long-term low-level toxin exposure, exposure to multiple toxins at the same time, or repeated exposure to the same or multiple toxins. Current NOAA research is addressing many of these questions.

A dolphin mortality event may have many contributing factors; harmful algae may only be one piece in the puzzle. Thus, we do not yet know what effects recent Dinophysis and Pseudo-nitzchia blooms may have on the current marine mammal populations living in Texas coastal waters. Coastal managers and researchers are on alert for marine mammal strandings that may be associated with exposure to harmful algae, but the story is unfolding, and is very complex.

On March 22, 2014, four days after harmful algae were found in Galveston Bay, the M/V Summer Wind collided with oil tank-barge Kirby 27706 in Galveston Bay near Texas City, releasing approximately 168,000 gallons of thick, sticky fuel oil. The Port of Houston was closed until March 27. State and federal agencies are responding. NOAA is providing scientific support and Natural Resource Damage Assessment personnel are working to identify injured natural resources and restoration needs. Much of the oil has come ashore and survey teams are evaluating the shorelines to make cleanup recommendations.

Time will tell if the harmful algal toxins and oil in Galveston Bay have a major negative effect on the marine mammals, fish, and sea turtles that live in surrounding waters. Fortunately, NOAA scientists with a range of expertise—from dolphins to harmful algae to oil spills—are on the job.

Maggie Broadwater is a research chemist and serves as coordinator for NOAA's Harmful Algal Bloom Analytical Response Team at the National Centers for Coastal Ocean Science in Charleston, S.C. Dr. Broadwater earned a Ph.D. in Biochemistry from the Medical University of South Carolina in 2012 and has an M.S. in Biomedical Sciences and a B.S. in Biochemistry.