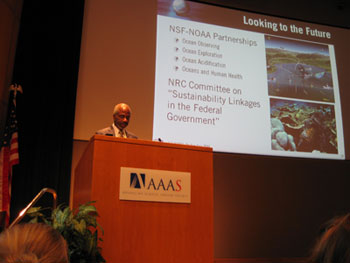 A recent symposium sponsored through the Ocean Sciences Board of the National Academy of Science celebrated over 20 years of scientific advancements through the U.S. Global Ocean Ecosystems Dynamics (U.S. GLOBEC ) program, jointly supported by NOAA and the National Science Foundation (NSF). U.S. GLOBEC combined observing technologies, focused process-oriented field experiments and synthesis through coupled physical, ecological and climate modeling to understand how climate change and variability will translate into changes in the structure and dynamics of marine ecosystems and in fishery production.

The symposium was held Oct 4 - 5, 2011 at the American Association for the Advancement of Science. Introductions from Dr. Larry Robinson, NOAA's Assistant Secretary of Commerce for Conservation & Management and Dr. Margaret Cavanaugh, Deputy Assistant Director for the NSF Directorate of Geosciences helped to set the context within large national ocean science priorities. Speakers highlighted fundamental discoveries from the program as well as progress in marine population dynamics, physical-biological modeling, climate-ecosystem interactions and applications to ecosystem-based management. A special aspect of the program was the inclusion of presentations from three young scientists who were supported through the U.S. GLOBEC program early in their graduate student and post-doctoral careers, and who are now leading future scientific progress in GLOBEC themes. 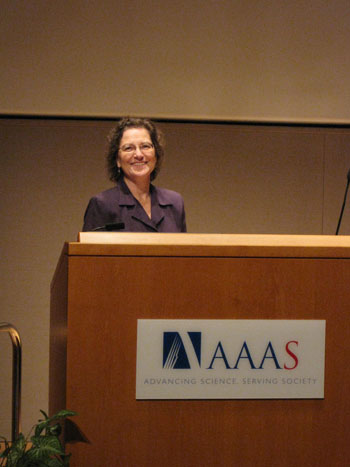 The U.S. GLOBEC program was able to integrate sampling of physical and biological variables on the same space and time scales, and field studies with modeling. It involved hundreds of researchers from across the U.S. from scores of academic institutions and Federal agencies and provided a venue for academic and Federal scientists to work together. This allowed for cutting-edge science to be incorporated into NOAA work, and gave an application pathway for academic science. U.S. GLOBEC exemplified productive collaborations across NOAA with strong scientific leadership and involvement of researchers from the NOAA National Marine Fisheries Service, and the NOAA Office of Oceanic and Atmospheric Research laboratories.

Discoveries made during U.S. GLOBEC have fundamentally advanced our observations and understanding of potential impacts of climate on regional ocean ecosystem dynamics. This understanding, together with technological advances in sampling and ocean modeling has enabled practical applications to the management of living marine resources. U.S. GLOBEC also leaves behind a rich legacy of regional ocean datasets, multi-scale coupled models and a network of new scientists poised to contribute to future climate change science and assessments.

NCCOS is proud to have been able to support U.S. GLOBEC over the long time frame needed to make substantial progress on these large and complex issues. NCCOS's Dr. Elizabeth J. Turner ably managed NOAA's involvement in U. S. GLOBEC over the length of the program and deserves much credit for its success.