NOAA-funded scientists studying the diets of 22 species of Hawaiian coral reef fish living at both shallow (0-30 meters) and mesophotic (30-150 meters) depths found that the food source differed for invertebrate-feeding and omnivorous fishes and remained the same for plankton-feeding fishes. Although the sources of food were different between shallow and mesophotic depths, the trophic position or function of the reef fishes remained essentially the same across depths. These results place important constraints on models, such as Ecopath, that predict trophic positions of ecosystem components, that are widely used to manage shallow and mesophotic reef fish populations. 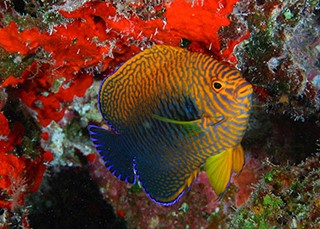 Potter’s Angelfish, Centropyge potteri, is one of the focus species of this study that inhabits both MCEs and shallow coral reefs. Credit: James Watt

Mesophotic coral ecosystems (MCEs) are light-dependent communities typically found at depths ranging from 30 to 40 m, extending past 150 m in tropical and subtropical regions. MCEs may serve as refuges for depleted shallow water coral reef species. This study used isotopic analyses (i.e., carbon and nitrogen isotope ratios) of both the fish and the individual amino acids in the fishes tissues to compare nutrient sources and trophic levels for coral reef fishes living at both mesophotic and shallow depths off Maui and O‘ahu. Results of this study are important for fisheries management models to ensure that they reflect the differences in food webs between MCEs and shallow reefs. Shallow reef food webs have phytoplankton and macroalgae at the base of the food chain, whereas MCEs are primarily phytoplankton based.