An NCCOS-funded study found that the invasive non-native variety of the common reed Phragmites australisin the Chesapeake Bay estuary thrives around altered and hardened shorelines and disturbed marshes and beaches with elevated nutrients. The research team also concluded that native Spartina marsh plant communities will struggle under this invasion without management action. 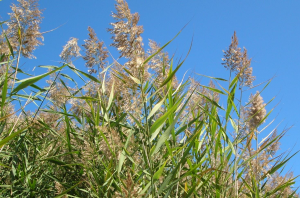 The seven-year project investigated the impacts of shoreline hardening and showed how multiple environmental stressors and disturbances in the intertidal zone (e.g., excess nutrients, toxic substances, and shoreline alterations) facilitated the spread of invasivePhragmites.The researchers also found that the emergence of invasive Phragmites was influenced bythe ability of resident plants and underlying environmental conditions to limit the success of the invader. 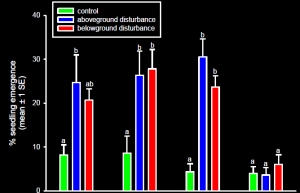 Without an effective management strategy, the non-native reedcould potentially occupy all brackish and the majority of tidal freshwater wetlands. The researchers emphasizedthatmanagement efforts should includerestoration of native plant communities in addition toPhragmites eradication.The team also recommended prioritizing wetlands and watersheds to identify ecosystems that would benefit most from Phragmites management and where the negative impacts of management would beminimal.