On April 20, 2010, an explosion on the Deepwater Horizon oil drilling platform released millions of barrels of oil into the Gulf of Mexico, making it the largest marine oil spill in U.S. history with documented negative impacts to zooplankton, fish, birds, sea turtles, and marine mammals. Now, new research partially funded by NCCOS has disclosed negative impacts following the spill to the inconspicuous yet most important part of the marine food chain, phytoplankton. 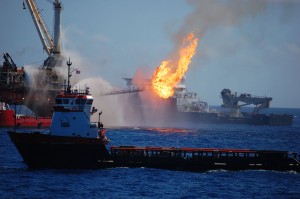 Scientists led by Florida Gulf Coast University compared Gulf phytoplankton data from 1990 to 2010 with data collected during and after the spill and found that species shifted from ciliates and phytoflagellates to diatoms and cyanobacteria. The team also found that phytoplankton abundance was 85 percent lower in 2010 when compared to previous years.

While the study does not directly link the oil spill to these findings, it currently represents the best opportunity to examine potential impacts from the Deepwater Horizon spill on phytoplankton. The effects of lower abundance and species shifts of phytoplankton on organisms higher up the food chain remain unknown. The study is published in the scientific journal Environmental Pollution .