Scientists supported by NOAA NCCOS, EPA and the Gulf of Mexico Research Initiative have mapped the size of the 2015 Gulf of Mexico low-oxygen dead zone. The areal extent of hypoxia measures approximately 6,474 square miles, about the size of Connecticut and Massachusetts combined, exceeding the prediction from June . 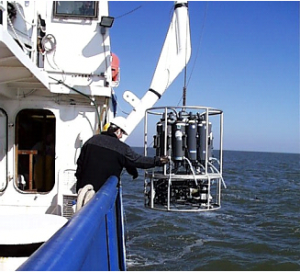 Nutrient run off from agricultural and other human pollution in the Mississippi River basin fuels the hypoxia and strongly correlates with river discharge. Heavy rains in June factored into the increase. Scientists from the Louisiana Universities Marine Consortium (LUMCON) surveyed the dead zone from from July 28 to August 4, 2015 aboard the LUMCON R/V Pelican.

The annual dead zone measurement, now in its 31st year, provides a critical scientific record of the hypoxia trend of in the Gulf. The Mississippi River/Gulf of Mexico Watershed Nutrient (Hypoxia) Task Force uses the metric to gauge progress towards shrinking the size of the dead zone. NOAA has supported the mapping of the dead zone in the northern Gulf of Mexico since 1990. 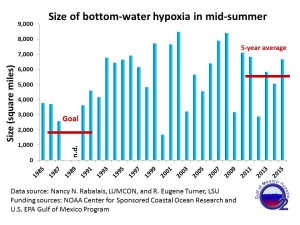 Gulf of Mexico hypoxic zone measurements from 1985 through 2015. Credit: LUMCON