Published on: 05/22/2014
Research Area(s): Stressor Impacts and Mitigation
Region(s) of Study: Waterbodies / Gulf of Mexico; U.S. States and Territories / Florida, Mississippi
Primary Contact(s): alan.lewitus@noaa.gov
The Glider Implementation Plan for Hypoxia Monitoring in the Gulf of Mexico is now available to guide the use of autonomous underwater vehicles for enhanced monitoring of seasonal hypoxia in the northern Gulf of Mexico.The need for improved monitoring of the hypoxic zone (dead zone) has been repeatedly emphasized by the Interagency Gulf Hypoxia Task Force to better characterize the spatial and temporal relationship of the hypoxic zone to Mississippi River nutrient loading. 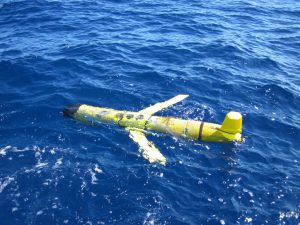 The Slocum ocean glider comes to the surface to transmit data after every 4 -6 hours underwater during data collection missions. Credit: C. Lembke, University of South Florida.

The use of gliders as part of a broad Gulf hypoxia (low dissolved oxygen) monitoring strategy was first identified in 2012. In response, NCCOS led a workshop in April 2013 to determine an optimal glider design and monitoring strategy for spatial and temporal coverage that would complement ship surveys and observing systems. The new Glider Implementation Plan is based on outputs from the workshop.
The plan is tiered according to available funds, with three priorities: 1) four cross-shelf glider transects that cover both east and west of the Mississippi River Delta, 2) expandedcoverage spatially and temporally, and 3)sensors to measure the effects of hypoxia on living marine resources. NCCOS and NOAA's Integrated Ocean Observing System Program are collaborating on a plan for a pilot study that would lead to integration of gliders with an operational monitoring program for the hypoxic zone.
For more information, contact Alan.Lewitus@noaa.gov.
Explore Similar News
August 3, 2019