Fish and invertebrate mass mortality events are increasing in coastal zones worldwide, but in many cases it can be difficult to pinpoint the cause of death. Toxic spills, hypoxia (low dissolved oxygen), disease outbreaks, and toxin-producing harmful algal blooms possibly cause these events, but it is critical from a management and response perspective to accurately identify the cause. 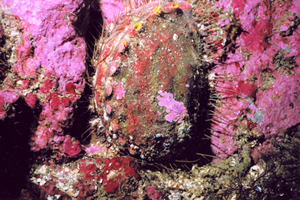 An abalone from the Pacific Northwest (credit: NOAA NMFS).

The research team used forensic genomics to understand the cause of a mysterious, 2011 California mass mortality event of red abalone (Haliotis rufescens) and its genetic effects on the red abalone population.Yessotoxin, probably produced by a concurrent bloom of the alga Gonyaulax cf. spinifera, is proposed as the main cause of the event. The team includes investigators from Stanford University, the California Department of Fish and Wildlife, the University of Gothenburg, and the University of California at Santa Cruz.

Taming the lionfish: Florida fights back against invasive species - CNN.com