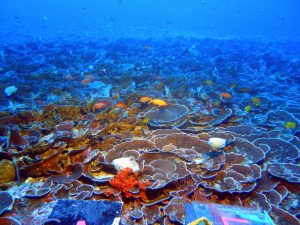 Mesophotic coral ecosystems are populated with many of the same fish species found on shallow reefs. 'Au'au Channel, off the southwest coast of Maui, at a depth of 230 feet. Credit: NOAA and Hawai'i Undersea Research Laboratory.

NOAA-supported scientists working in the Hawaiian Archipelago documented some of the most expansive mesophotic reefs (deeper light-dependent reefs between 100–500 feet depths) in what some refer to as the oceanic "twilight zone." The exploration revealed several large areas of 100-percent coral cover, particularly in Maui's ʻAu'au Channel. Of the fish species observed, 43 percent were unique to the Hawaiian Islands, which is more than double the 17 percent of unique species found on shallow Hawaiian reefs.

Because of the challenges associated with working at such depths, mesophotic coral ecosystems are less understood and often not considered in coral reef management efforts. For this study, scientists used a combination of submersibles, remotely operated vehicles, and technical diving to study these difficult-to-reach environments.

"With coral reefs facing a myriad of threats, these findings are important for understanding, managing and protecting coral reef habitat and the organisms that live on them," said Kimberly Puglise, an oceanographer with NOAA's National Centers for Coastal Ocean Science. "Some species of fish and corals studied can live in both shallow and mesophotic reefs, and could potentially replenish each other if one population is overexploited." 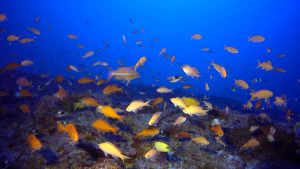 Kure Atoll, the northernmost reef in the Hawaiian archipelago, hosts mesophotic reefs with the highest level endemism known from any marine ecosystem on Earth. All of the fishes in this image (90 m depth) are endemic or unique to the Hawaiian Islands. Credit: Bishop Museum and NOAA.

This paper, led by Bishop Museum, represents a collaboration of 16 scientists from five institutions and two federal agencies. The research was supported by NOAA's National Centers for Coastal Ocean Science, Papahānaumokuākea Marine National Monument, Coral Reef Conservation Program, Office of Ocean Exploration and Research, and the Pacific Islands Fisheries Science Center, as well as, the Hawai'i Undersea Research Laboratory and the State of Hawai'i.

For more information check out the project page or contact Kimberly.Puglise@noaa.gov.