A recent report released by the National Centers for Coastal Ocean Science (NCCOS)found relationships between land use, water quality, and several important aquatic organisms in certain tributaries of the Chesapeake Bay. This report synthesized six years of water quality and biological condition measurements in six Chesapeake Bay tributaries with different land use patterns. Linkages were explored between water quality, fish health, submerged aquatic vegetation, crab health, and land use in the various watersheds.

Although all six rivers showed some signs of stress, there were some differentiating factors. The strongest land use signal was that of excessive nutrients and chlorophylla, another indicator of nutrient levels,in the agriculturally dominated watershedsofthe Corsica and Sassafras Rivers. The excess of nutrients in these two agricultural rivers also corresponded with poor water clarity and reduced benthic vegetation. The strongest signal for fish was that of generally better health in the forested Nanjemoy watershed in contrast with the heavily agricultural Corsica and Sassafras. Crab health indicators were mixed in their response relative to land use. 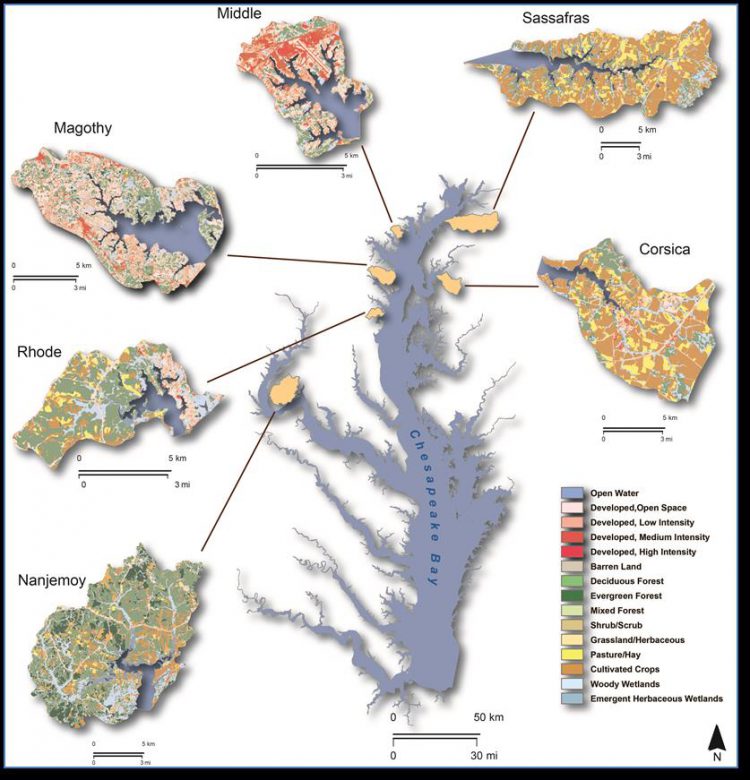 Locations and land use classes for six watersheds studied in the Chesapeake Bay.

Management implications from the study include the need for continued efforts to reduce nutrient and sediment introduction to the Chesapeake Bay, as well as the need to preserve habitat to support healthy and diverse fish populations. Preliminary findings and sampling strategies from this study were used to design an ongoing ecological assessment being conducted by NCCOS in the Tred Avon River as part ofNOAA's Choptank Habitat Focus Area. This study was conducted by scientists at the Cooperative Oxford Laboratory and was published as NOAA Technical Memorandum 207.