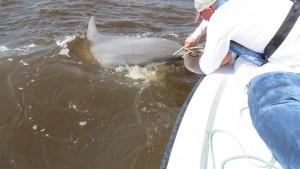 From October 1 through October 5, 2015 South Carolina experienced a catastrophic rainfall event that produced over 24 inches of rain in some areas from Columbia to Charleston. On October 8 a dolphin was found alive entangled in a crab pot line on the south side of Charleston Harbor where the Ashley River discharges. A second dolphin was reported on October 13 alive and entangled in a crab pot line approximately 2.4 km east of the first report closer to the mouth of the Ashley River. Both dolphins were disentangled without serious injury and swam away. Water conditions at the time were low in salinity with very low to zero specific conductance and very high turbidity causing the water to look coffee-colored. While dolphins can echolocate in turbid waters, the slower speed of sound in low conductive and highly turbid waters may mask vertical lines and may cause a reduction in the ability to detect these lines.