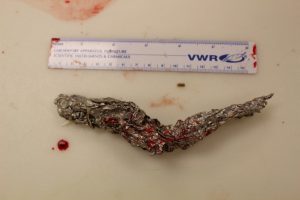 A necropsy of a female bottlenose dolphin stranded in emaciated condition last month on Edisto Beach, South Carolina, revealed a largepiece of aluminum foil lodged in the marine mammal's esophagus. The NCCOS scientists conducting the examination reported that the foil caused a complete blockage of the esophagus, resulting in the dolphin's inability to swallow and consume prey, which led to the animal's starvation.

Very little is known about the effects of marine debris ingestion at the population level for any cetacean species, or for any local estuarine species of bottlenose dolphin. This event emphasizes the need for necropsies of stranded coastal wildlife to better document the impacts of marine debris on the survival of protected species. 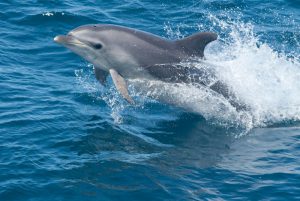 Millions of tons of debris enter the oceans each year from trash, damaged fishing gear, or shipping accidents. Ingestion of marine debris by wildlife, including marine mammals, has been a contributor to numerous animal deaths.The NOAA Marine Debris Program's 2014 Report on the Occurrence and Health Effects of Anthropogenic Debris Ingested by Marine Organisms explains that the mere presence of ingested debris can have a variety of health effects, including: laceration or ulceration of the digestive tract, direct blockage of the digestive tract, and reduced nutrient uptake and urge to feed.