Warming ocean temperatures could favor the expansion of the invasive Indo-Pacific Lionfish and native tropical species distributions within the Atlantic according to a recent study conducted by researchers from the National Centers for Coastal Ocean Science, National Marine Fisheries Service, and the University of North Carolina, Wilmington. The study was conducted from 2006 to 2010 in temperate rocky reefs on the North Carolina shelf in water depths of 5 to 46 meters. 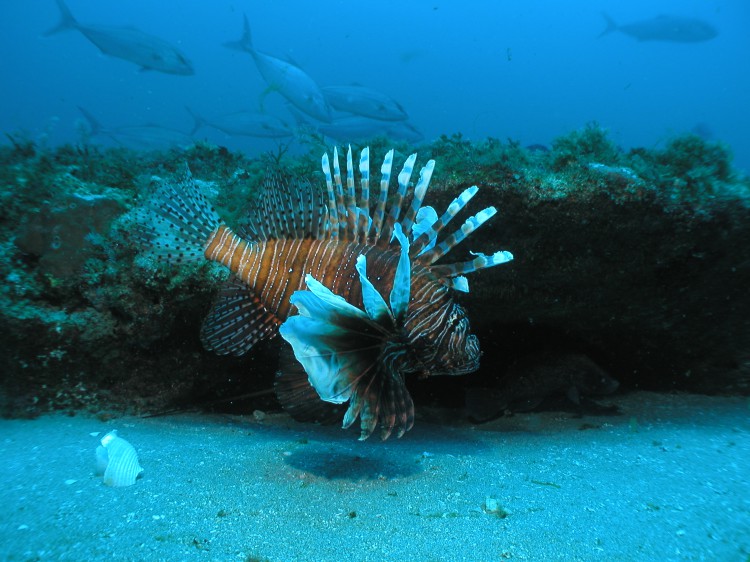 Indo-Pacific Lionfish (Pterois volitans) were first reported off the North Carolina Coast in 2000. Since then lionfish have become the most abundant and widely distributed species in water depths greater than 122 feet. The lionfish distribution off North Carolina is controlled primarily by winter bottom water temperatures. Credit: Doug Kesling NOAA -NURC.

Because lionfish and other native tropical fishes observed in this study are not restricted by depth, warming temperatures could favor expansion of their distributions into near-shore areas (and northward) that they are currently unable to inhabit.

The study also features the first minimum temperature thresholds generated for 40 Atlantic reef fish species, including the invasive Indo-Pacific Lionfish, and are critical to detecting and projecting climate-related impacts, such as distribution shifts within the fish community. The North Carolina shelf lies within a temperate-tropical transition zone, where historically, both temperate and tropical species co-occur at their respective southern and northern range limits. Globally, fish communities within these transition zones are becoming more tropical, making them regions of particular importance in detecting climate change impacts.