Monday is lost to bad weather. The other science crew gets a chance to run another of their transects while we wait for a break in the weather. Plans are to strike out first thing on Tuesday morning, but the wind is still blowing 15-25kt from the northeast with 3-6ft seas. We have no protection from the wind from that direction at this point on the coast, so we wait another few frustrating hours for the wind to lie down as it's predicted to do. With a little improvement we venture out toward Peard Bay, our last objective on the Chukchi side of Pt. Barrow. It's a rough 1 hour ride into the barrier island chain guarding the Bay. We have heard from another research vessel we are familiar with, the Ukpik, in the area on a charter mission. They tell us that the 20ft channel shown on the chart off the tip of Seahorse Island has shoaled in and is no longer passable. We must pick our way in through shoals across a broad area between barrier islands. Fortunately, we meet them on their way out of the bay as we go in, so we follow their trail in.

We had modified the sampler by adding more weight to the arms and that seems to have solved the problem of it not triggering to close on contact with the bottom. We were able to get four of the five target sites in spite of starting late. A high pressure cell to our north and a low to the south combine to pump cold Arctic air from the northern ice pack in on us. It is cold working in the wind on the deck and everybody has on hats, hoods and face masks. We look like a bunch of bank robbers. Snow squalls pop up in all directions. The trip out to the Ron Brown was as rough as going in, but we are able to thread our way back through the shoals to open water the way we came in. On board, the ships' crew was puzzled by the odd precipitation signature seen on the radar scope. They have never seen snow on radar before. 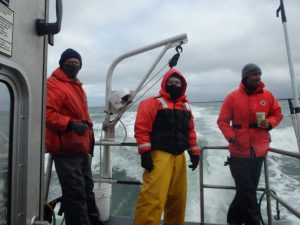 The science crew bundles up against the arctic winds blowing on deck. Credit: NOAA.

Wednesday broke bright, sunny and calm. Our calmest day yet. We have an ambitious schedule and hope to get samples from Kugrua Bay, an extension of Peard Bay behind a pair of peninsulas in the southern end, and in the deeper central portion of Peard Bay, plus trawling for fish. It was a long but relatively easy trip in. We had just enough water to get over the bar into Kugrua Bay. We got all 3 sampling stations as planned. We are constantly watched by curious spotted seals and bearded seals that pop their heads out of the water to look at us and quickly duck back under water. We decide this bay has the 'seal of approval'. The sampling process goes well back in Peard Bay and we got all 3 stations plus had time to pull a couple of trawls. The trawls come up with precious little but a few pricklebacks, some tiny sculpins, one flounder, and a bunch of red and green algae. It's a very small trawl net, but there is very little there to catch apparently. Next we round Pt Barrow, the northern-most point in the US, and head into the Beaufort Sea. 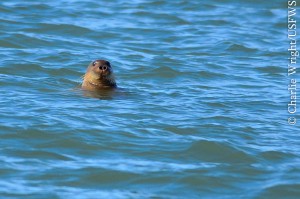 A bearded seal pops above the surface near the ship. Credit: USFWS.

The cabin in the boat is very small and we are crammed into small spaces made even smaller by all the bulky clothes we are wearing against the cold. There is a small space under the foreward deck where we store emergency immersion suits, sample containers, a change of clothes in the event we get wet, or stranded away from the ship, and a food cooler. There is just enough space for two people to sit, or lean back against the emergency suits The coxswain generally grabs a bite to eat while we are working a station. Then as we each get hungry in turn, we take turns crawling down below to wolf down a sandwich or have some soup while in transit between stations. Sometimes we have a bag of candy bars. Somewhere, somebody came up with the idea of a candy bar as a 'deck steak', that bit of a meal that sees you through till it's your turn to go below and have a quick lunch. A real steak; no, but it seems like it at the time when you're on a cold, wet, wind-swept deck. 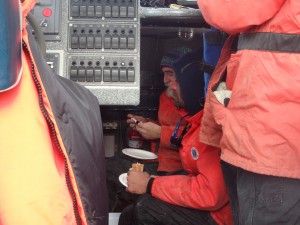 The crew takes a quick break to eat between sampling. Credit: NOAA.

Back on the ship there is great excitement. The Ron Brown has never before been in high latitudes. Few of the ship's company have ever seen ice bergs before. Many of the younger scientist have never seen them either. A small patch of ice has broken off from the ice field to the north and drifted in an eddy toward our position. Most pieces are small (dozens of feet across). But it is the first such sighting of the cruise. Much more will come into view as we go north around Pt Barrow and up on the water column sampling transects of the other science party aboard. 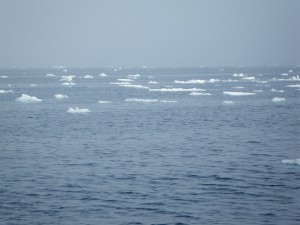 Icebergs are seen floating in the distance, a rare site for the crew of the Ron Brown. Credit: NOAA.