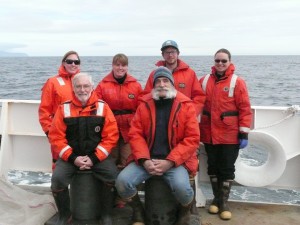 From left to right: in the front row, Ian Hartwell and Max Hoberg, and in the back row, Rachel Pryor, Terri Lomax, Brian Stillie, and Katie Beaumont. Credit: NOAA.

We left the dock ahead of schedule, into clearing skies and calm winds. Passed around the south side of Kodiak and cruised along the south side of the Aleutian chain on our starboard side. Running with the Gulf of Alaska current, we are making good time. We are surrounded by whales, but don't take too much notice. Both of the scientific crews are busily unpacking gear and setting up the laboratory spaces and deck gear. We will pause the ship on occasion to test the gear and deployment procedures for both the oceanographers on the ship and the biologists using the launch. Our plan is to take a small boat from the ship and traverse a few miles of open water to enter lagoons and estuaries where we will do our sampling. After we pass into the Bering Sea through Unimak Pass we do a trial launch of the Peggy D. Getting on and off the boat is tricky as we have to descend a ladder over the side of the ship to a small platform at the stern of the Peggy D, while bobbing up and down in the waves. It is a fairly dangerous procedure, especially for someone with short legs like me. 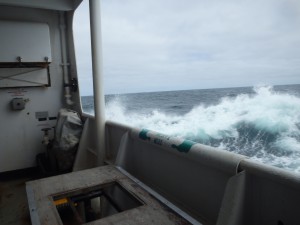 Waves crash against the side of the NOAA Ship Ron Brown as it sails off the coast of Alaska. Credit: NOAA.

We are expected to pass behind a low pressure system to our east, so we are preparing to be hit by some heavy seas at night and everything needs to be tied down in the lab, and in our bunk rooms. The front did as predicted, and kept moving east and eventually over land. We did get some larger seas that woke me in the middle of the night, but they had dissipated by morning. At night we were running in thick fog, with the fog horn blaring most of the night. We passed through Unimak Pass and into the Bering Sea near dawn. Another front is coming through with high wind and waves. It was rough all day Saturday, but laid down by Sunday afternoon. The evening was bright, with clear blue skies. 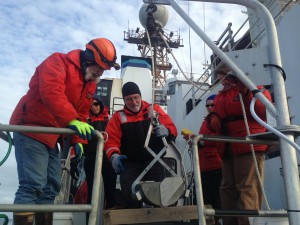 We continue to organize gear and move into planning details. Which people will be in which boat, who will handle specific sampling tasks, who will rotate off the small boat and onto the ship between sampling days. All sampling tasks must be practiced to find problems with space or timing. We have only one day available for sampling in each lagoon. If certain samples are not taken, we will not have a chance to revisit that location. The first day of a field mission is always slow and a little confused, and every boat has a slightly different configuration to adapt to, so having several days to drill is a luxury we normally never have. 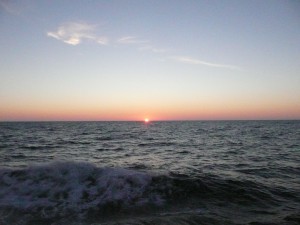 On the Bering Sea off of Alaska, the sun sets after 10:00 pm in August. Credit: NOAA.

Monday night we expect to cross the Arctic Circle shortly after midnight. Most people on the ship have never been this far north. There is a little excitement aboard, with secret plans for an initiation ceremony conducted by the so-called Blue Nose Society (those who have crossed the Arctic Circle before).

All You Can Eat: usoceangov NOAA Ocean Today kiosk video