National Centers for Coastal Ocean Science supported scientists have documented that the 2013 'dead zone'(area of hypoxia, or low oxygen) in the northern Gulf of Mexico west of the Mississippi River delta now covers at least 5,800 square miles of sea floor or about the size of the State of Connecticut. This dead zone area is above the long-term average and above the average size of the last five years. 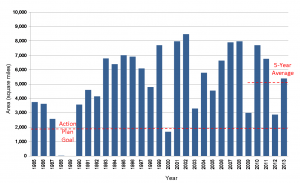 Based on the May nitrogen load from the Mississippi River, the area was predicted earlier to be about 7,300 to 8,600 square miles, or one of the largest on record (comparable to the size of New Jersey). The measured size, while large, differs from the larger model prediction due to mixed conditions on the southeastern part of the study area, and winds from the west pushing the hypoxic water mass towards the east and thus reducing the bottom area footprint.

The dead zone was measured by scientists from the Louisiana Universities Marine Consortium (LUMCON) and Louisiana State University aboard the RV Pelican. NOAA has supported the mapping of the dead zone in the northern Gulf of Mexico since 1990.

Temperature and Oxygen Tolerances of Marine Species Predict their Distributions