In June 2011 scientists from the NOAA CSCOR-funded Northern Gulf of Mexico Ecosystems and Hypoxia Assessment (NGOMEX) program issued an outlook for a significant, and possibly record breaking, hypoxic zone this summer. The ensemble forecast predicts the 2011 hypoxic zone will measure between 8,500 and 9,421 square miles, about the size of the state of New Hampshire. This forecast is based on the results of two models developed in partnership with Louisiana State University and University of Michigan through the NGOMEX program. 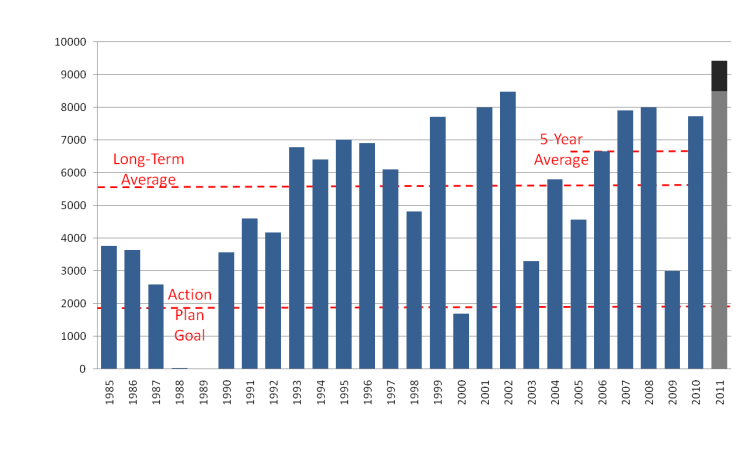 Like weather forecasts, this prediction is based on the results of multiple forecast models that are used to develop an integrated, or ensemble, forecast of the size of the hypoxic zone. While each model can individually provide useful information, the ensemble approach improves prediction accuracy. The two models used to develop the ensemble forecast employ a statistical approach to relate nutrient loadings and river discharge from the Mississippi and Atchafalaya Rivers to the areal extent of the hypoxic zone. Both forecast models have been validated with results from long-term surveys of the mid-summer hypoxia survey cruise conducted by Louisiana Universities Marine Consortium (LUMCON). In addition to forecasts, both models also inform the Gulf of Mexico Hypoxia Task Force on the amount of nutrient reductions required in order to meet the Task Force coastal goal of a maximum hypoxic zone size of 5,000 square kilometers. A 3-dimensional hydrodynamic model, developed by Texas A&M University through the NGOMEX program, will provide an update to the forecast in early July based on predicted weather and oceanographic conditions.

While there is much uncertainty surrounding the precise effects of Mississippi River flooding, barring a severe weather event such as a tropical storm, the results of the forecast models indicate that flooding will likely result in an extremely large hypoxic zone. Nutrient loading into the Gulf of Mexico was greatly increased by the exceptionally high flow rates in May. In addition, the diversion of water westward through the Morganza Floodway is predicted to greatly expand the areal extent of hypoxia in the western portion of the hypoxic zone. Also of concern, is that the opening of the Bonne CarrÃ© Spillway which is expected to exacerbate the occurrence of hypoxia in Mississippi Sound.

NOAA's National Marine Fisheries Service is currently taking oxygen measurements in conjunction with their summer ground fish survey in the Gulf of Mexico and, while not specifically designed to determine the size of the hypoxic zone, this cruise will provide the first indications on the extent of the hypoxic zone. Results of this cruise are posted in near real-time through Hypoxia Watch.

Since 1985, LUMCON has conducted a NOAA-supported mid-summer cruise timed to measure the extent of the hypoxic zone at its maximum size in late-July. This cruise continues to serve as the key metric to assess progress of the Gulf Hypoxia Task Force. In support of this cruise, which can be subject to tropical storms and other weather patterns that can aerate the water column, two additional NOAA-supported survey cruises were recently added by Texas A&M. These cruises will take place in June and August.

In addition, NOAA Fisheries will be taking oxygen measurements in conjunction with their summer ground fish survey in the Gulf of Mexico and, while not specifically designed to determine the size of the hypoxic zone, this cruise will also provide the early indications on the extent of the hypoxic zone. Results of this cruise are posted in near real-time through Hypoxia Watch.