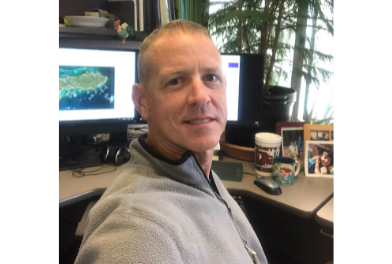 Kendall conducts original research as a principal investigator for the Biogeography Branch. His research seeks to document the habitats and movements of fish and the ways that humans impact and interact with them. He has expertise in analysis of telemetry, remote sensing, and fisheries independent data.

As a marine biologist with the Biogeography Branch since 1998, Kendall has co-authored dozens of scientific publications on mapping marine habitats and the organisms associated with them. He first came to NOAA as a Knauss SeaGrant Fellow after earning a BS at the University of South Carolina and an MS  at NC State in marine science. He completed his Ph.D. in marine science at the University of Maryland while working at NOAA on seascape ecology. Marine protected areas such as National Marine Sanctuaries, National Estuarine Research Reserves, and National Parks are frequent locations of his research. Dr. Kendall seeks novel combinations of historical and emerging datasets to inform management and promote sustainable interactions with the nations coastal ecosystems.