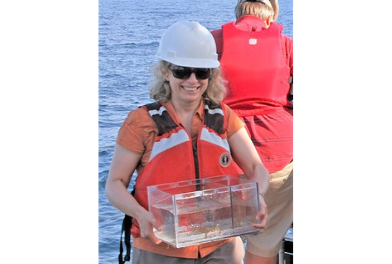 Puglise is the Program Manager for two competitive programs: the Regional Ecosystem Research Program and Coastal Hypoxia Research Program. She leads the effort to advance the understanding of mesophotic coral ecosystems and works with scientists to translate their information to resource managers.

Puglise has worked at NOAA Headquarters in Silver Spring, MD since 2002. Prior to joining NCCOS, she was the Science Director for NOAA’s Undersea Research Program. She has managed research programs covering such diverse topics as methane hydrates, shallow, mesophotic, and deep coral ecosystems, marine genetic resources, impacts of hypoxia on marine ecosystems, and goal setting for South Florida. She works as an interface between scientists and managers and is a member of the South Atlantic Fishery Management Council’s Coral Advisory Panel. Prior to taking a desk job, Puglise was an active marine researcher and has spent a significant amount of time at sea doing everything from sediment coring to zooplankton sampling to marine mammal surveys.

Puglise received her Bachelor of Arts degree in Biological Sciences from the University of California Santa Barbara and her Master of Science degree in Marine Science with an emphasis in Biological Oceanography from Moss Landing Marine Laboratories.