Primary Contact(s): steve.kibler@noaa.gov
This project began in July 2018 and will be completed in May 2021 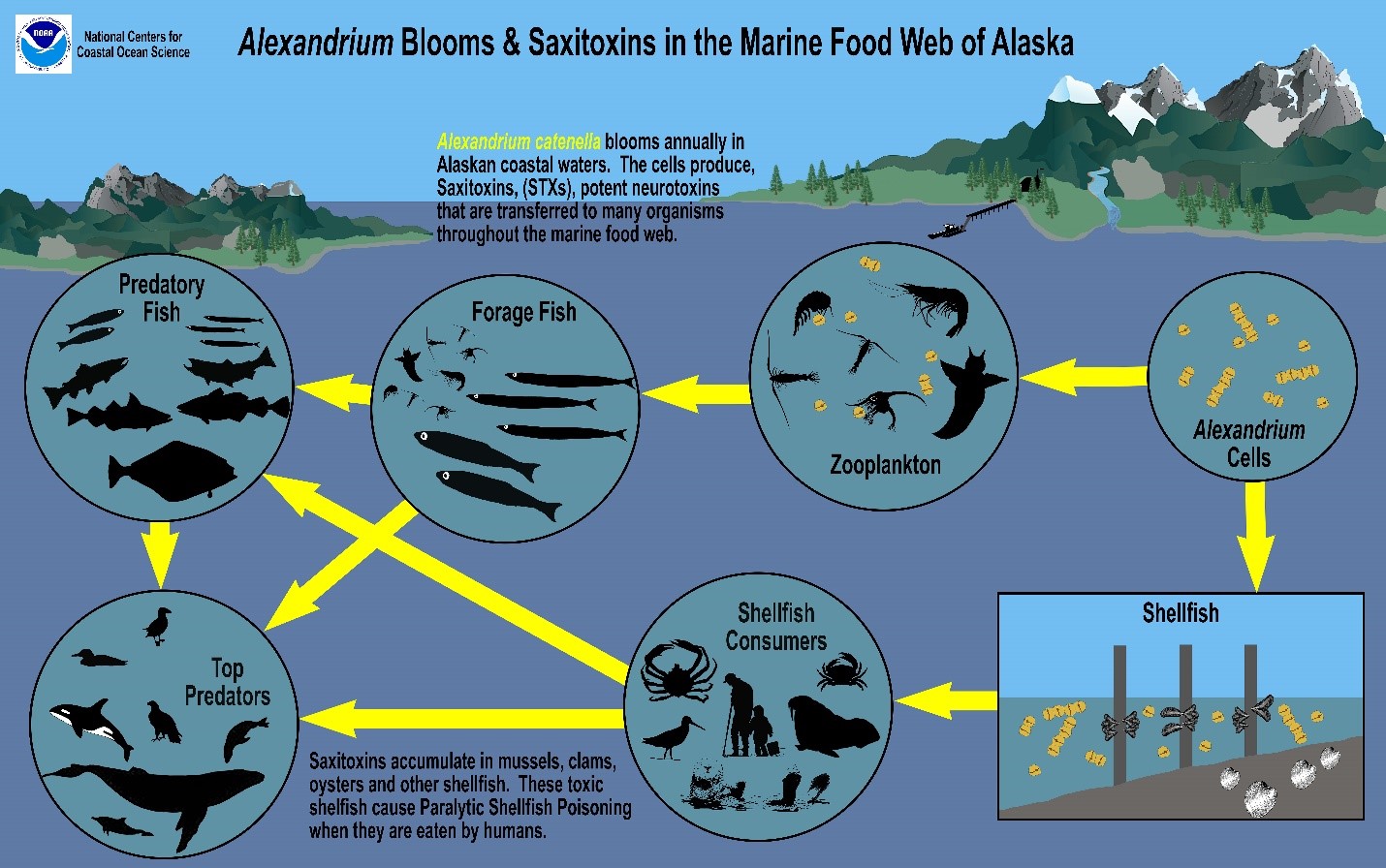 Saxitoxins produced by the dinoflagellate Alexandrium catenella are potent neurotoxins that accumulate in Alaskan shellfish during blooms each summer. In shellfish consumers, these compounds cause paralytic shellfish poisoning (PSP), a potentially fatal illness with severe neurological and gastrological symptoms. Because of limited shellfish monitoring, the remoteness of many coastal communities, and a strong tradition of seafood consumption, Alaskan residents are exposed to the highest PSP risks in the U.S. Data from Alexandrium blooms have shown STXs may transfer widely in the marine food web, reaching substantial concentrations in seabirds, marine mammals and other high level consumers. Because these compounds are transferred through zooplankton, forage fish and benthic invertebrates, there is concern that saxitoxins may accumulate in commercially important predatory fish species, although the trophic transfer pathways for PSP toxins in Alaska are largely unknown.

This 2.5-year project investigates the transfer of PSP toxins through the marine food web via focused sampling efforts in Kachemak Bay and Prince William Sound, with additional samples from partners in the Kodiak and Aleutian Islands. With assistance from partners, we are collecting samples of plankton, shellfish, forage fish, the five major species of Alaskan salmon (Sockeye, Coho, Chinook, King, Chum) and other commercially important fish species (Pacific Halibut, Pacific Cod, Rockfish). Plankton samples are used to determine the abundance of toxic Alexandrium cells. All samples are being analyzed for the presence of PSP toxins by high performance liquid chromatography (HPLC) and a newly developed enzyme-linked immunosorbent assay (ELISA).

The data from this project will be used to better understand the environmental drivers of toxic Alexandrium blooms in Alaska, and to inform forecasting tools in coming years. The toxin data will be used to identify key vectors of PSP toxins to protected and endangered marine mammal and seabird species in Alaska. Toxin data from salmon and commercially important fish are being used to assess the potential risks to human health and the valuable Alaskan fishing industry.