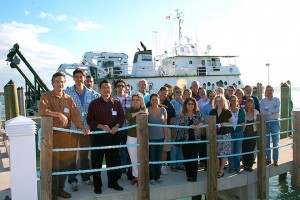 University scientists sponsored by NOAA are conducting a 14-day mission to study how the mid-depth, middle-light (mesophotic) coral reefs of Pulley Ridge may replenish key fish species and other organisms in downstream reefs of the nearby Florida Keys National Marine Sanctuary and Tortugas Ecological Reserve.

With the well-documented decline of Florida's reefs, places like Pulley Ridge may serve as sources of larvae that can help sustain the Florida Keys' reef ecosystem and the tourism economy that depends on it. This is the first research cruise for the 5-year project, led by University of Miami Professor Robert Cowen, and represents a unique collaboration of more than 30 scientists at ten different universities.This research project is funded by the National Centers for Coastal Ocean Science Regional Ecosystem Prediction Program.The cruise will be underway from August 14 -28, 2012.

Update: Due to the threat of hurricane Isaac to the Keys and vicinity, the mission will end early. The vessel will arrive back in Miami on Saturday, August 25.