NCCOS-developed domoic acid sensors on board two Environmental Sample Processors (ESPs) deployed in Monterey Bay, California have provided early warning of a toxic Pseudo-nitzschiaalgal bloom. Only a week into the deployment that began in early May, particulate domoic acidlevelsexceeded 30 micrograms per liter of seawater, which was consistent with the ESPs also detecting very high concentrations ofPseudo-nitzschiacells known to produce the potent neurotoxin. For reference, shellfish harvesting closures are implemented when domoic acidlevels reach 20 micrograms per gram of shellfish tissue. 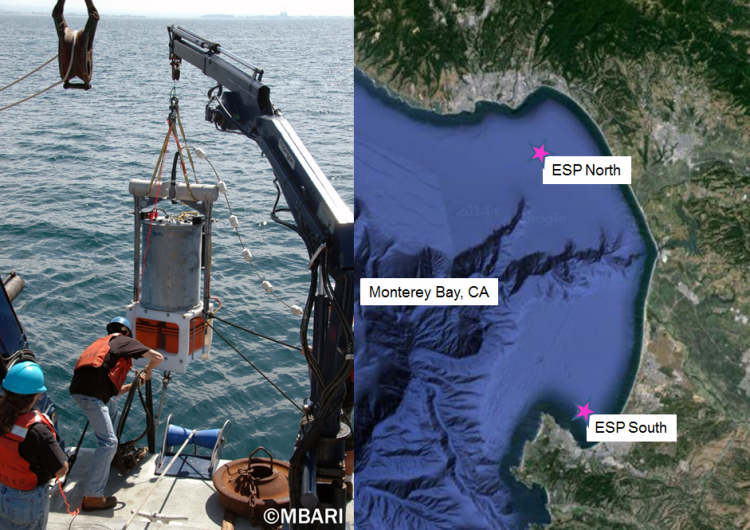 The high domoic acid andPseudo-nitzschiacell concentrations were reported to the California Department of Public Health (CDPH), the Marine Mammal Center, and NOAA's Monterey Bay National Marine Sanctuary, alerting these groups to the offshore presence of a toxic bloom that may affect fishery resources and wildlife in the region. The CDPH issued a press release advising consumers not to eat recreationally harvested mussels and clams, commercially or recreationally caught anchovy and sardines, or the internal organs of commercially or recreationally caught crab taken from the local area. Information on this toxicbloom is also being provided to the Central and Northern California Ocean Observing Systemand the California Harmful Algal Bloom Monitoring and Alert Programfor wider distribution to additional stakeholders via portals operated by these groups.

The ESPs are part of an array of sensors and robotic vehicles deployed during theMonterey Bay Aquarium Research Institute's (MBARI) Spring 2015 Controlled, Agile, and Novel Observing Network (CANON) experiment. Over the past five years, this study has documented the physics, chemistry, and biology of California waters, while testing new methods forremotely assessing oceanic conditions and collecting samples of microorganisms forin-situanalysis, as well as for return to shore-side laboratories. The current experiment has documented some of the highest levels of Pseudo-nitzschia and domoic acid ever recorded for Monterey Bay, since its initial discovery in this area 25 years ago. Researchers also confirmed the presence of domoic acid in the local food web based on detection of the toxin, as well as Pseudo-nitzschia cells, in anchovies. Observing networks such as CANON will be critical components of Regional Coastal Ocean Observing Systems under theU.S. Integrated Ocean Observing System,providing valuable 'coastal intelligence' to support timely decision making by managers and public health officials.

This work is funded as part of NOAA NCCOS's Ecology & Oceanography of Harmful Algal Blooms (ECOHAB) program through a regional project led by the University of California Santa Cruz, with critical contributions by partners that include MBARI, NCCOS, Moss Landing Marine Laboratory, the University of California Los Angeles, and the Southern California Coastal Water Research Project, along with IOOS Regional Associations SCCOOS and CeNCOOS. These partners are studying the complex environmental factors that contribute to the formation of blooms of toxicPseudo-nitzschiaand other harmful algae in 'hot spots' along the California coast. Such information is neededto develop accurate forecasts and seasonal predictions that enable early action to mitigate the impacts of harmful algal blooms in the region.

Ecosystem Services of Shellfish in the Chesapeake Bay