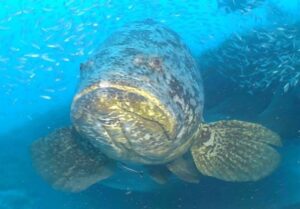 A goliath grouper over four feet in length inspects the ROV while dozens of other large grouper and massive schools of small fish swarm a steep ledge in Tortugas South Ecological Reserve. Credit: UNCW UVP.

Returning to ship-based research suspended by the COVID-19 pandemic, the National Centers for Coastal Ocean Science Habitat Mapping Team concluded the final research mission of an abbreviated season on NOAA Ship Nancy Foster from September 9 to 15, 2020. The goal of the mission was to map and characterize the coral reef ecosystem of the Tortugas South Ecological Reserve and the Florida Keys National Marine Sanctuary. The project filled gaps in bathymetry within the reserve, improving resolution of seafloor maps. These maps will help identify sensitive reef habitats and aid management of coral reef and fisheries resources in the sanctuary.

A multibeam echosounder was used to create high-resolution maps, significantly increasing the level of detail needed to interpret and identify sensitive habitats. Over 135 square nautical miles of updated bathymetry data was collected over seven days. A water column echosounder was used to map fish densities within the survey area, and during a focused survey that revisited a prominent ledge feature in the Tortugas South Ecological Reserve. Surveys covered 575 nautical miles (the linear distance for water column echosounding), and documented aggregations of fish over high-relief seabed features and complex midwater scattering layers likely representing zooplankton. 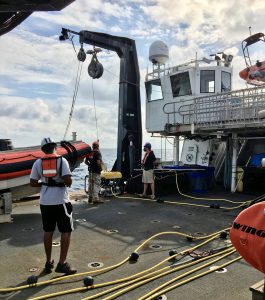 An ROV, operated by the Undersea Vehicles Program at the University of North Carolina Wilmington, traversed 14 transects covering 10 kilometers, while logging 20 hours of video. The ROV dives targeted features on the seabed, such as ledges and ridges mapped the previous night, with the multibeam echosounder. The ledges emerged from the seabed as steep cliffs or massive stacks of boulders, or as ridges with attached sponges and octocorals. Inside the ‘no-take’ Tortugas South Ecological Reserve, they observed dozens of large reef predators and commercially important fish species, including goliath and scamp groupers, and schools of cubera snapper. At other sites they identified diverse reef fish and invertebrates, including numerous grouper species.

Less conspicuous in the new multibeam seabed imagery were numerous sinkholes mapped in depths between 50 and 60 meters. These features measured over 10 meters in diameter and were scattered across the seabed. Each hole was unique in shape and depth, with some having narrow but deep crevices and even tunnels. Large fish like grouper may be excavating these holes and they expose hard substrate as habitat for a variety of fish and invertebrates like butterfly fish, snappers, arrow crabs, nudibranchs, and octopus.

The Florida Keys National Marine Sanctuary includes some of the most diverse and pristine corals in the only barrier reef in the continental United States. Preserving this unique ecosystem while promoting sustainable use is at the core of NOAA’s mission of environmental stewardship in support of the Blue Economy. 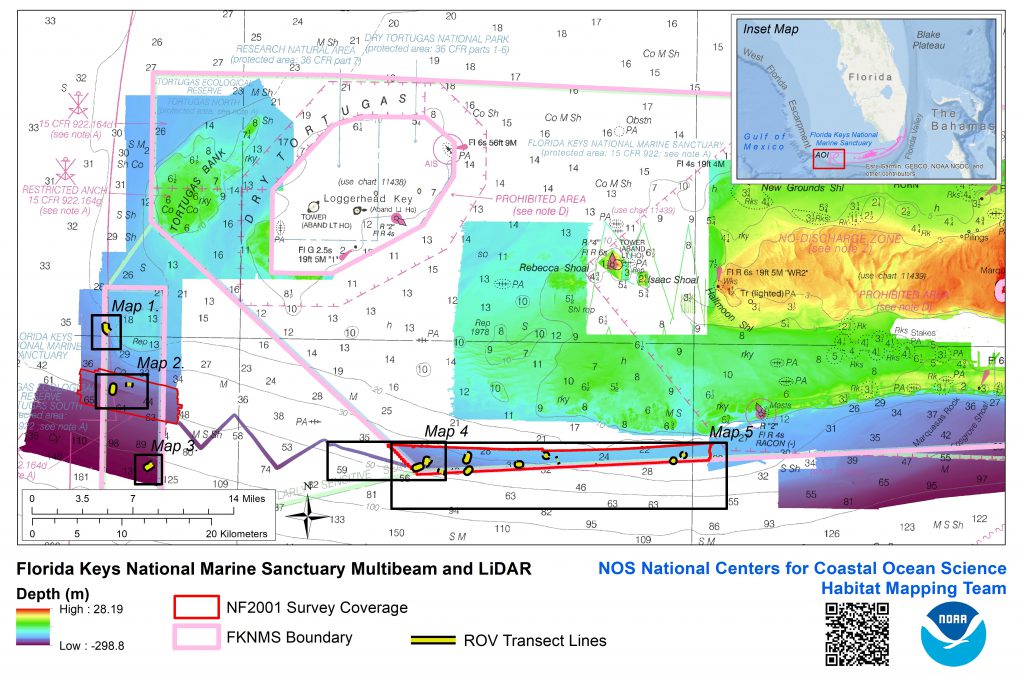