On Nov. 18, a Puerto Rico man pleaded guilty to a felony violation of the Lacey Act for selling meat and carapaces from threatened and endangered sea turtles in 2009 -2010. He will be sentenced in February and faces up to five years in prison and a $250,000 fine. The FBI and NOAA Office of Law Enforcement snared the poacher during a joint undercover investigation conducted in 2009 -2010 and sent samples of meat and photos of carapaces to the NCCOS Marine Forensics Program for species identification. Morphological analysis confirmed that the carapaces were hawksbill turtle, and DNA revealed that the meat was from at least two hawksbills and one green turtle. Green sea turtles are prized for their meat and fat, and hawksbills for the 'tortoiseshell' they produce. 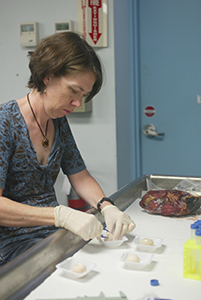 All species of sea turtles are threatened by poaching, habitat destruction, marine debris, pollution, climate change, and bycatch. Successful prosecution not only punishes current poachers, but also deters future violators, and helps ensure sea turtles can continue to fulfill their roles in the ecosystem.