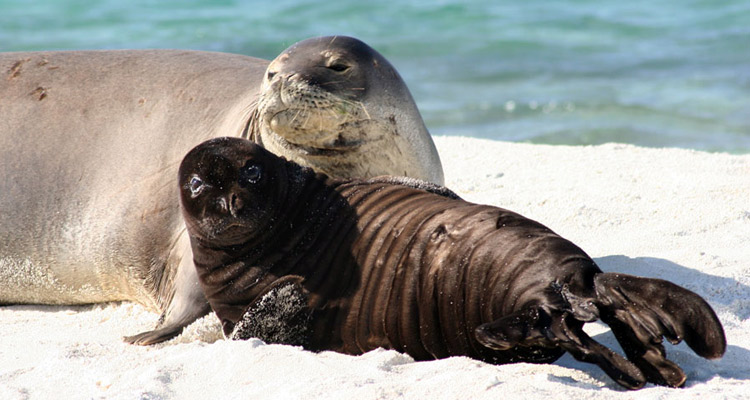 A single-celled plant known as Gambierdiscus is responsible for the most common cause of harmful algae poisoning worldwide: ciguatera. The algae's potent neurotoxin--called ciguatoxin--is found in over 400 species of fish and is conservatively estimated to sicken more than 50,000 people every year. Two years ago, researchers from NOAA's National Centers for Coastal Ocean Science and Pacific Islands Fisheries Science Centerfound the toxin in the blood of wild Hawaiian monk seals. The endangered mammals are recognized as a key species in the Papahanaumokuakea Marine National Monument, yet its population of 1100-1200 continues to dwindle at four percent annually. A NOAA press release called for future steps "to understand more clearly how widespread (ciguatoxin) exposure is and, more importantly, what role it may be playing in the decline of the species."

Because human and monk seal testing is often limited to individual blood samples, we use what are called toxicokinetic models in laboratory animals to better understand what happens to the toxin once it is in the body. Toxicokinetics describes the rate a chemical enters the body, how long it stays, and how long it takes to be eliminated--more recognizable as nutrients in our food, but in this case it's a poison. Our scientists determined ciguatoxin's toxicokinetic parameters for the first time and published the findings for three exposure routes in rats (two links below).

39% of the ciguatoxin is absorbed from the intestines into the bloodstream within 6 minutes, where it travels to the brain and liver and lingers for as long as 36 hours in the body until it is filtered out and eliminated in feces. Understanding this timeline helps the scientists make models that can compare experimental results in laboratory animals with corresponding environmental exposures in humans or other animals.

NCCOS scientists are measuring ciguatoxin in Hawaiian monk seals from an archive of blood cards collected over the last decade in response to the Monument'sNatural Resource Science Plan, which calls for scientific examination of 'biocontaminants in blood and other tissues to determine presence and load of these chemicals and assess their impacts to monk seals.'

NCCOS scientists are now conducting similar toxicokinetic studies in fish, measuring blood and tissue levels of ciguatoxin as they feed on the poisonous algae. These new parameters will be helpful for models to predict how changes in coral reef ecosystems impact human health and the recovery of endangered species such as the Hawaiian monk seal.