NCCOS and National Park Service (NPS) researchers are evaluating the boundaries of the Virgin Islands Coral Reef National Monument in Coral Bay, St. John relative to the home range of reef fish that the monument was conceived, in part, to protect. The team has tracked reef fish movements using surgically implanted acoustic transmitters and an array of 40 acoustic receivers deployed from 2013 to 2015 inside and outside the monument's boundaries. 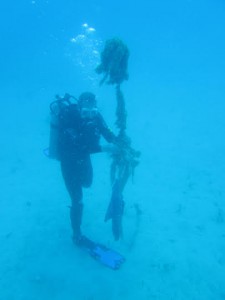 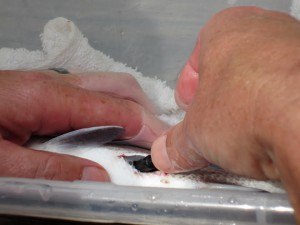 NCCOS and NPS scientists recovered the receivers in March 2015 and downloaded the telemetry data for analysis over the coming months. Results of this collaborative study and others by NCCOS, including reef mapping and fish census data, will be used by the NPS to determinethe effectiveness of the monument's boundaries and for other applications, including an environmental impact review by the National Marine Fisheries Service for marina development proposals in Coral Bay Harbor.

Artificial Reef Design and Siting in US Missing Ecological Principles