New modelling research sponsored by NCCOS shows that Texas red tides originate in the southwestern Gulf of Mexico in the Bay of Campeche.

These harmful algal blooms, caused by the dinoflagellate alga Karenia brevis, result in large fish kills, human respiratory irritation, and shellfishing closures in affected areas. Unlike red tides on the west coast of Florida, where researchers focused most on bloom formation, the origin of Texas red tides has long been a mystery. Although it was hypothesized that these algal blooms originated inthe southwestern Gulf of Mexico,scientific evidence was lacking, until now.

Simulated distributions of individual cells after 60 days from a single model run in forward time for each year highlight the differences between Texas bloom years (2009, 2011) and the Texas non-bloom year (2010). Each red dot represents a single individual cell from the model. The Texas/Mexico border starts at approximately index number 200 on the vertical scale. Credit: D. Henrichs, R. Hetland, and L. Campbell, TAMU. 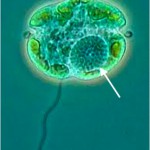 To investigate the origin of bloom-forming K. brevis cells along the coast of Texas, Texas A&M University scientists modeledthe potential distributions of cells during two bloom years and one non-bloom year. Running this model in reverse showed that K. brevis cells near the Texas coast during early fall originated from the southern Gulf of Mexico in bloom years and from the northern Gulf of Mexico in the non-bloom year. Identifying a southern origin for bloom-forming cells provides a target area for increased sampling to provide early warning of potential blooms of K. brevis. The research is published in the journal Ecological Modelling .