NOAA’s Deep Sea Coral Research and Technology Program recently completed its second year of the Southeast Deep Coral Initiative (SEDCI), a four-year effort to study deep-sea coral ecosystems throughout the southeast U.S., including U.S. waters of the Caribbean, Gulf of Mexico, and South Atlantic Bight. The initiative is a NOAA cross-line office undertaking between NOS, NMFS, OAR, and NESDIS that collaborates with federal partners and academic institutions. The goal of the initiative is to collect scientific information needed to improve the management of deep-sea coral ecosystems throughout the Southeast.

In 2017, SEDCI supported expeditions to three priority areas, including: deep-water banks in the northwestern Gulf of Mexico that are being considered for expansion of the Flower Garden Banks National Marine Sanctuary, deep-slope habitats off West Florida that are being considered for the establishment of new habitat areas of particular concern by the Gulf of Mexico Fishery Management Council, and submarine canyons off North Carolina. Over the course of five expeditions and 33 days at sea, these expeditions collectively surveyed over 100 miles of seafloor during 68 individual dives and over 233 hours of bottom time. The researchers recorded dense deep-sea coral communities in many, but not all of these areas, highlighting the importance of these expeditions to support decision-making with the best possible science. 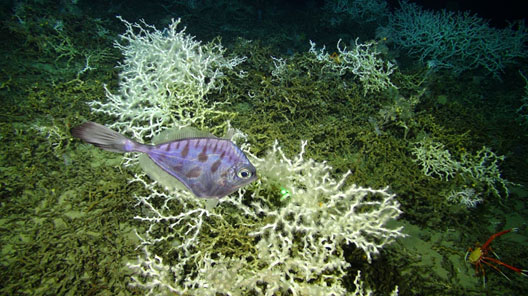 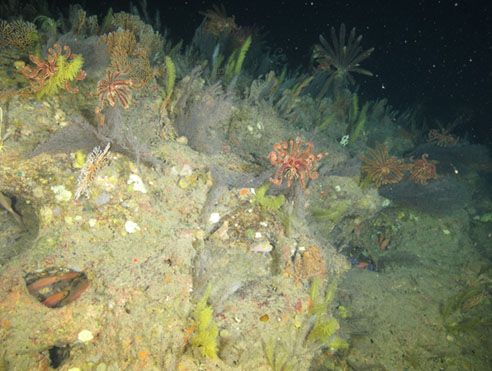 A dense community of black corals and crinoids 400 feet deep on Elvers Bank in the northwestern Gulf of Mexico. The community was surveyed using ROV Mohawk during a 2017 SEDCI-supported expedition led by Emma Hickerson aboard R/V Manta. Credit: NOAA-FGBNMS/UNCW-UVP.