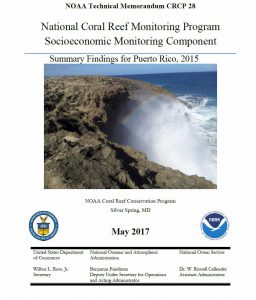 Household surveys conducted from December 2014 to February 2015 revealed that Puerto Rican residents generally support a range of marine management policies and regulations (such as limited recreational use, stricter pollution control, and community participation in management), and are moderately familiar with the various threats faced by coral reefs (such as hurricanes, pollution, and coastal development). Over two thirds of survey respondents indicated that they felt the threats to coral reefs were at least "large" and over half felt that the condition of coral reefs would get worse over the next 10 years. Residents perceived the amount of coral in Puerto Rico to be in poorer condition than other marine resource conditions assessed in the survey. Forty-one percent of respondents indicated that the current condition of the amount of coral was "bad;" and 66% of respondents indicated that the amount of coral had gotten worse over the last decade.

These findings represent the baseline assessment for future socioeconomic monitoring of Puerto Rico's coral reefs, and they will feed into composite indicators that will detail the status of Puerto Rico's coral reef adjacent communities in relation to the other US coral reef jurisdictions. Surveys will be repeated in each US coral reef jurisdiction after the completion of a full monitoring cycle, approximately once every five to seven years.