New Species of Marine Sponge Discovered in Gulf of Alaska

NOAA scientists and their partners came across an unknown marine sponge last summer while conducting a survey of continental shelf features off the coast of southeastern Alaska. Using a remotely operated vehicle, the team collected a rock for geological analyses that contained numerous marine invertebrates - including an unidentified, yellow-orange, encrusting demosponge.

Enrique Salgado, a coral biologist with NCCOS, examined the sponge aboard the team's research vessel and preserved tissue samples, which were sent to sponge taxonomists for morphological analysis and DNA sequencing. Results indicate this is a new species in the genus Prosuberites, and the first time the genus has been observed in Alaskan waters. The tissues ofProsuberites species have been shown to contain unique compounds with potential anti-microbial and anti-tumor activity that might have applications to human diseases.

Salgado was charged with naming the new species. The proposed name, Prosuberites salgadoi, is undergoing approval and will be fully described and registered as a new marine species in May 2016. 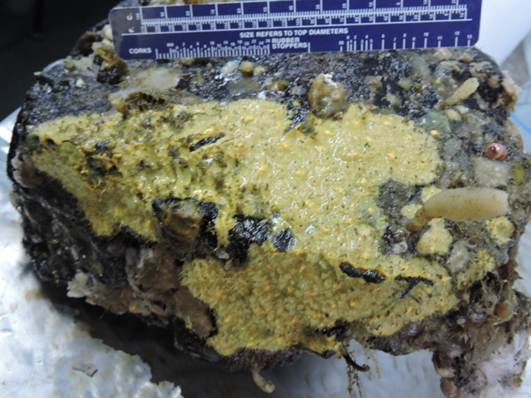