A new modeling study by NOAA scientists and others at University of the Virgin Islands and Louisiana State University predicts the distribution of Orbicella corals in shallow and mesophotic reef ecosystems along a portion of the Puerto Rico shelf. These model results will help researchers identify areas of unexplored mesophotic coral habitat and guide the management and conservation of these Threatened coral species. 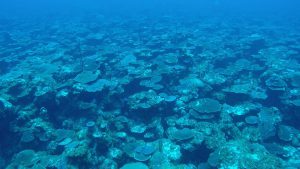 Orbicella corals (common name: star corals) include three species: O. annularis, O. faveolata, and O. franksi, which are primary reef-building corals throughout the Caribbean in both shallow and mesophotic coral reef ecosystems. Mesophotic reef ecosystems are low light environments that globally occur between 30 and 150 meters, and along the Puerto Rico shelf, are abundant with O. faveolata and O. franksi in the upper mesophotic zone (30 - 60 meters deep). However, population declines of these coral species have occurred in U.S. waters causing all three to be listed as Threatened under the U.S. Endangered Species Act.

The models specifically show the potential location of Orbicella corals along a portion of the Puerto Rico shelf under typical environmental conditions using variables such as sea surface temperature, wave exposure, and seafloor topography. Not only will the models provide managers with information about potential Orbicella locations, they will also provide insights into unexplored areas of mesophotic reef habitat.

The models were developed by Katharine Egan when she was a graduate student at the University of the Virgin Islands and with CSS, Inc. under contract with NCCOS in Beaufort, North Carolina. Katharine is now a Physical Scientist with the NOAA Office of Ocean Exploration and Research.

This work is part of the NCCOS project on spatial predictive modeling of threatened corals in the U.S. Atlantic and Caribbean.