Published on: 04/19/2013
Research Area(s): Other Topics / Outreach, People and Infrastructure 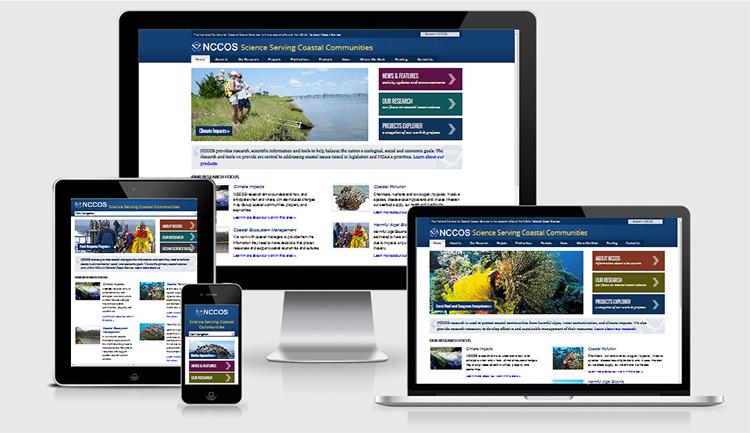 After a few years of planning, sweat, tears, scores of meetings, loads of paperwork, and three different acting deputy directors, the National Centers for Coastal Ocean Science soft-released its new, audience-focused website in October of 2012 and we continue to roll out more enhancements and features.

The goal of the revised site is to consolidate the NCCOS web presence, tightly weave all related content together, deliver an experience that is both browser and device agnostic, and focus on our core research areas.

We additionally sought out to employ the latesttechnologies of both dynamic content management and also what is referred to in the industry as "responsive web design." In the recent past, websites may have been built to serve up different typed of content, or a different structure after detecting whether a user was viewing the site on a desktop computer or a mobile device. Most weren't even built to do this. But these standalone, mobile-formatted sites were simplified versions of their parent sites, usually with limited functionality to increase page speeds over a slow connection.

When tablets started becoming more prominent, there was a need for websites that sat somewhere between a smart phone and a traditional computer. Then, as smartphones became smarter, you had higher quality resolutions with different layout modes—which ultimately meant a lot to account for if you were developing individual sites for each device.

A responsive website goes beyond this and dynamically adjusts design that can stretch and rearrange itself based on the width (or viewport) of the browser rendering the site. Responsive design solves the problem at a very low level by resizing and rearranging elements on the screen to fit the user's device. This is usually accomplished through a combination offluid-width grids,flexible images (high and low resolutions), multiple media queries, and so forth.

Americans used 114 million smartphones in August, up from 101 million in the beginning of the year, according to comScore, which tracks the industry. The percentage of Web pages viewed from mobile devices reached 13 percent, up from 7 percent a year earlier. PC sales are expected to shrink this year for the first time since 2001, according to IHS iSuppli, a market research firm. The revised NCCOS website is positioned to take advantage of this change in consumer behavior.