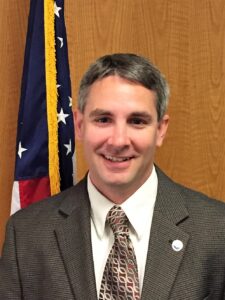 Dr. Steven Thur was announced as the Director of NCCOS on December 10, 2017. Credit: NOAA

On December 10, 2017, Dr. Steven Thur was announced as the new Director of the National Centers for Coastal Ocean Science (NCCOS), after two years as Acting Director while carrying out his duties as NCCOS Deputy Director--a position he has held since 2013. Thur’s NOAA career has focused on applying science to the management, restoration, and conservation of marine resources, with special interest in how the biophysical and social sciences are used to sustain coastal ecosystems and the vibrant human communities that depend upon them for livelihoods, recreation, and as a place for connecting with nature. Thur oversaw the recent realignment and development of NCCOS's four priority research areas, which include marine spatial ecology, environmental stressors and their impacts, change along our coasts, and social science. Before NCCOS, Thur was Coordinator of NOAA’s Coral Reef Conservation Program, also serving as the Co-Chair of the Steering Committee for the interagency, intergovernmental U.S. Coral Reef Task Force. Before that, Thur was an economist for the National Ocean Service's Office of Response and Restoration.

Thur received his Ph.D. in marine policy from the University of Delaware’s Graduate College of Marine Studies in 2003. His dissertation research was on sustainable financing mechanisms for coral reef marine protected areas. He holds Bachelor’s degrees in biology and economics from St. Mary’s College of Maryland.