Recent discoveries have revealed that the Mid-Atlantic Canyons host a wide array of beautiful, valuable and fragile gardens of habitat-forming deep-sea corals (DSC). On April 29–30, NCCOS scientist Brian Kinlan participated in a Mid-Atlantic Fishery Management Council (MAFMC) workshop to develop boundary alternatives to protect DSC from bottom-tending fishing gear in all major Mid-Atlantic canyons. The purpose of this workshop was to examine existing boundary alternatives for DSC protection zones, and to forge a new consensus boundary alternative that addressed concerns of major stakeholders, including the bottomtrawl fishing industry, NGO's, and scientists. 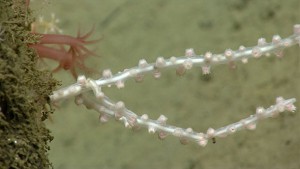 Close-up of a "young" bamboo coral colony observed during the 2013 Northeast U.S. Canyons Expedition. The polyps have contracted and withdrawn their tentacles. The two large red polyps in the background are the octocoral Anthomastus. Credit: NOAA.

The group reached consensus on boundary alternatives for all 15 proposed DSC zones. These 15 zones cover all 28 major canyons in the Mid-Atlantic region, comprising the vast majority of DSC habitat in the Mid-Atlantic, with an area of more than 7,000 square kilometers. The MAFMC will vote on DSC protection alternatives at their next meeting June 8–11, 2015.

This outcome was possible only through data and models developed by NCCOS. From the National DSC geodatabase to habitat suitability modeling and field support of model validation, NCCOS science was critical to advancing this major place-based conservation outcome one step further towards reality.