To ensure consistency in the quality of scientific echosounder and sonar data being collected by NOAA research ships, NCCOS has partnered with the Office of Exploration and Research to calibrate the scientific echosounder on the NOAA Ship Okeanos Explorer. Researchers from NCCOS joined the Okeanos in Puerto Rico to conduct the calibration and train the ship's crew. Scientific echosounders and sonars are increasingly used by NOAA to characterize seafloor habitats, describe the distribution of marine organisms in the watercolumn as well as detect other oceanographic features such as gas seeps. 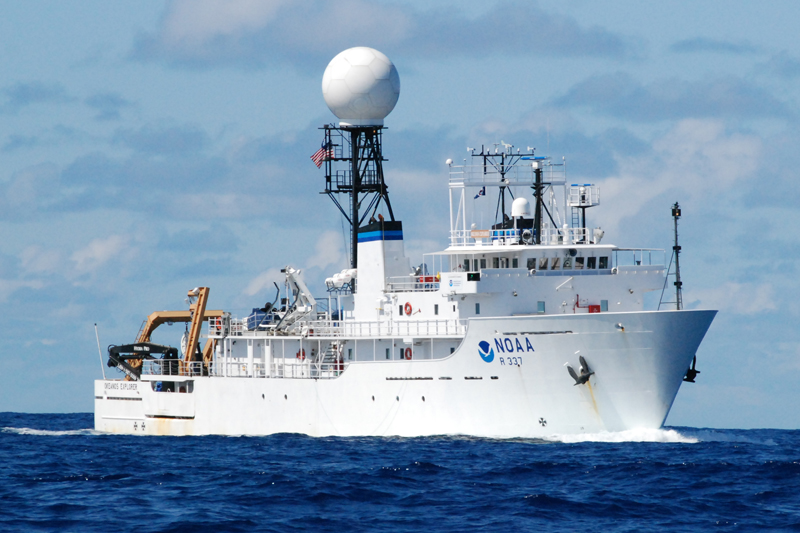 The NOAA Ship Okeanos Explorer is the only federally funded US ship assigned to systematically explore our largely unknown ocean for the purpose of discovery and the advancement of knowledge.

On the Okeanos Explorer, the echosounders are used to explore some of the deepest parts of the world's oceans. Calibration of scientific sonars ensures the highest quality and consistency in sonar data observations wherever the science operations are conducted by the ship. A standard operating procedure (SOP) is now available for the scientists of the Okeanos Explorer to use as guidance for repeating the calibration procedure.

The presence of the NOAA Ship Okeanos Explorer in the US Caribbean also provided an opportunity for NCCOS researchers to deploy a US Navy-owned glider that will conduct oceanographic and bioacoustics surveys around marine protected areas. The glider mission is part of ongoing research by NCCOS to characterize coral reef ecosystems in the US Caribbean.