It's not every day that an ecological modeler gets out in the field. I spend most of my time behind a computer synthesizing ecological data sets and conducting statistical analyses. Not the most fun activities one associates with marine science. So when I was invited to join a recent Biogeography Branch field mission to the Caribbean I jumped at the chance. Fun aside, I believe it is critical for ecological modelers to experience study systems and data collection firsthand. Only by getting out in the field can one begin to appreciate the true complexity of the natural world and the challenges of trying to observe and measure it. 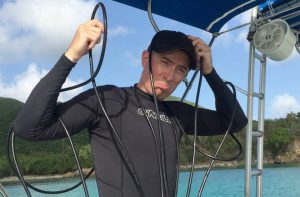 NCCOS ecological modeler out in the field in the Caribbean. Credit: NOAA.

The value of field work to an ecological modeler is clear to me, but I have often wondered what can an ecological modeler bring to field work beyond simple manual labor? Compared to veteran field marine scientists I am less familiar with the tools used, my identification skills are less honed, and my repertoire of knots leaves much to be desired. The Caribbean field mission was entirely new to me. Not only was this tropical environment and its exotic wildlife unfamiliar, but our mission to observe and classify seafloor habitat was something I had never done.

As the mission kicked off it was quickly apparent that I was in good hands with the lead scientist Will Sautter and our boat captain Kevin McCartney. Will, an experienced field marine scientist, went straight to work setting up the equipment and planning our course of action. Kevin headed us out to sea, skillfully navigating the waves and swell. I helped with whatever random tasks I was capable of. As the data collection began in earnest, I eased into my primary role of lowering and raising the underwater camera at each site with the aid of a hand-cranked downrigger. Picture an organ grinder. Or perhaps their monkey.

As the mission went on I became more proficient with the equipment and more familiar with the wonderful underwater world on the view screen. The sun and sea spray were refreshing. It was physically demanding work, and I was happy to be contributing to data collection. Yet I still wished that I could bring something unique to our effort. My opportunity arose midway through the mission.

Each day Will would look at a map of part of the study area covering almost 20 square miles with about 50 randomly placed sites. He would plan a route to hit each site while trying to minimize the overall distance traveled and thereby save time and fuel. But one night Will realized that the map for the following day was missing. We had a list of geographic coordinates for the sites, but no map we could use to follow an efficient route. How were we going to hit all of our sites without long transits between sites and constant backtracking? 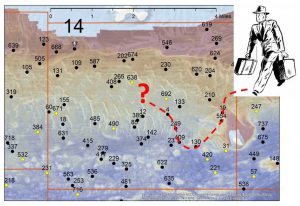 Enter the Traveling Salesman Problem . As part of a different modeling project one of our colleagues, Timothy White, introduced me to this mathematical problem which is essentially how to determine the shortest path among a set of cities that visits each city once and returns to the original city. It occurred to me that this was exactly the problem we were trying to solve in the field: to leave our base of operations, hit all of our sites, and return to base with as little travel as possible.

It turns out that solving the Traveling Salesman Problem is complex and computationally demanding for a large number of points. Fortunately the TSP package for my favorite statistical software R can be used to compute solutions to the problem. I fired up R back in my air-conditioned hotel room that night, ran the algorithm, and sent Will a list of our sites for the next day ordered along the most efficient route.

As we started out the next day I think Captain Kevin was skeptical because the first few sites were quite far apart, but by the end of the day the Traveling Salesman Problem solution had proved itself. What surprised me most was that the distances traveled didn't seem that much shorter than on previous days. I suspect Will's brain may function as well as the computer algorithm.

I am now back at my desk crunching numbers all day long daydreaming of rocking in the boat watching fish swim about coral reefs beneath me. My field experience was invaluable. Now when I see maps of seafloor habitat produced by the Biogeography Branch I understand the immense effort that goes into collecting the data, and I know what all the differently colored patches represent in reality. Most of all, I now know that even an ecological modeler can bring something useful to field work.