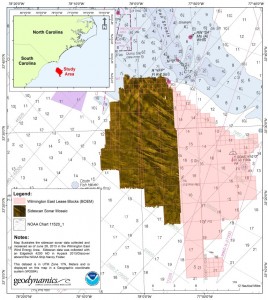 The first of three research missions to map the seafloor of a potential site for offshore wind development near Wilmington, N.C. was completed by researchers from NCCOS, in partnership with the University of North Carolina, NOAA's Office of Coast Survey and funded by the Bureau of Ocean Energy Management (BOEM) and NOAA using the NOAA Ship NANCY FOSTER. BOEM, in consultation with the North Carolina State Department of Commerce Energy Office, identified three locations off the North Carolina coast as potential ' Wind Energy Areas ' (sites for offshore wind farms) following an extensive synthesis of stakeholder meetings, historical biological, sociological, and economic data to reduce conflicts among users of the offshore resources.

Researchers from NCCOS and the University of North Carolina -Chapel Hill are collaborating to investigate the Wilmington East Call Area and providing new data to help further constrain the boundaries of the site to minimize impacts from construction of the offshore wind farms to the sensitive seafloor habitats, such as rock ledges and live hardbottom, which are known to support vibrant fish communities important to commercial fisheries as well as recreational diving industries and ecotourism in the region. The surveys will also survey for shipwrecks in the area that may be protected as significant historical or cultural resources. 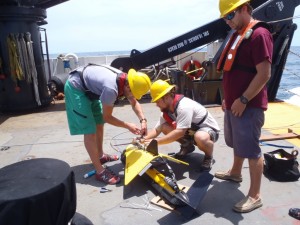 The research team is using side-scan, multi-beam, and split-beam sonars to map the 240 square nautical mile area. The maps will provide a complete coverage of the texture of the seafloor (an indicator of bottom sediment and topography), as well as an index of fish distribution and habitat use. The first mission, which ended on June 30, completed 40 percent of the area. The team will return in early September and again in October to complete the seafloor mapping and conduct diver and video surveys to groundtruth the seafloor habitats and assess the fish and biological communities in the area.

The new data collected during this project will also be reviewed by NOAA's Office of Coast Survey to update nautical charts in the region, which are currently based on depth soundings that date as far back as the 1940s, to support safe navigation around Frying Pan Shoals and the entry to the port of Wilmington.