The United States Virgin Islands are home to a historic and extensive fishery, but overfishing throughout the 1970s and early 1980s has depleted numerous stocks of once abundant fish - most notably, the Nassau Grouper (Epinephelus straitus). Nassau Grouper form large spawning aggregations that are predictable in time and location. Heavy fishing of the aggregation decreases the reproductive output, ultimately leading to total collapse of the fishery.

After the collapse of the Nassau Grouper, the Red Hind Grouper (Epinephelus guttatus) became the dominant commercial fish, comprising 67 -99 percent of the total fin fish catch in the U.S. Virgin Islands from 1987 to 1991. Unfortunately, stock assessments in the late 1980s found decreased abundance of juvenile Red Hind, which is indicative of overfishing. Red Hind, similar to Nassau Grouper, form spawning aggregations, which are easily targeted by fishers. To prevent the collapse of yet another fishery, seasonal closures were quickly established within the Red Hind Spawning Aggregation Area Marine Conservation District (MCD) off of St. Croix. 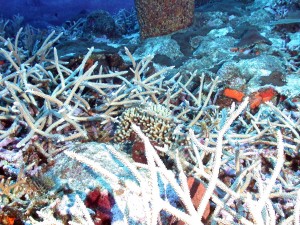 These conservation measures are essential to ensuring another fishery collapse similar to that of the Nassau Grouper does not occur again. Fishing with pots, traps, bottom longlines, gill nets, or trammel nets is prohibited year-round in these MCDs. Continued monitoring and research will allow for greater optimization of MCD boundaries and seasonal closures, thereby aiding both the fish and fishers. Both locations are managed by the Caribbean Fisheries Management Council. 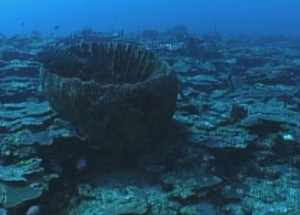 The focus of our activities this year on the NOAA ship Nancy Foster is to target these two MCDs and the seascape surrounding them. These areas were identified as priority locations by USVI Territorial resource managers and scientists because of the significant data gaps that exist. While some existing information is already available for these locations, this will be the first time these areas will have been synoptically mapped with coincident high-resolution multibeam and fish acoustics systems. From the collection of these data, we can characterize the extent, condition, and types of seafloor habitats, the terrain of the seafloor, and fish abundance of the locations. Our mapping area includes the MCDs, as well as surrounding areas, so that we can explore coral reef ecosystem characteristics both in and outside the marine protected area.

We deployed a remotely operated vehicle over theRed Hind Spawning Aggregation Area MCD and found a spectacular mixture of fish and coral including, a large stand of staghorn coral (Acropora cervicornis) and a tiger grouper (Mycteroperca tigris).