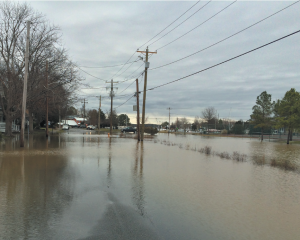 Scientists with NOAA's National Centers for Coastal Ocean Science just completed a vulnerability assessment of the Choptank River Complex, a critical component of the Chesapeake Bay ecosystem and one of NOAA's Habitat Focus Areas. The Chesapeake Bay, the largest estuary in the United States, provides people with valuable ecosystem services like fishing, tourism, and shipping. Impacts from climate change, including sea level rise and changes in precipitation, can threaten these services. The project identified a range of environmental threats, including sea level rise, storm surge, and stormwater flooding, calculated vulnerabilities, including social, structural, and natural resource, and then applied them spatially across the region, ultimately leading to maps of prioritized areas for further investigation of adaptation action to help mitigate coastal flooding.

In addition to these final maps, this research also produced a series of bivariate choropleth maps that illustrated the intersection between individual vulnerabilities and flood risks. Not only did the completed assessment identify which communities and ecosystem services in the region would be most at risk to threats from coastal development and change (both human and natural), it established a framework to inform decision making for coastal flooding adaptation action that could be applied to other communities across the country. This framework is based on the development of community-level indicators (social/economic, structural, and ecological), and an assessment of vulnerability and risk to improve communities' resilience to climate and coastal hazard impacts that included stakeholder engagement. This process ensures that the identified vulnerabilities can serve as a foundation for each community to address risk and determine adaptation strategies moving forward. 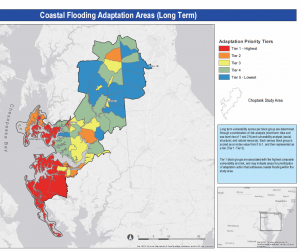