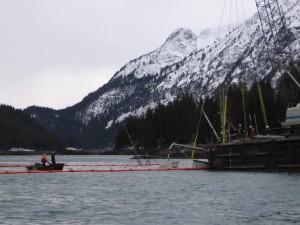 A U.S. Coast Guard crane raises a sunken fishing vessel from Jakolof Bay, Alaska. The site is cordoned off with boom to prevent the boats' oil from contaminating a nearby oyster farm.

A 5-foot snowfall created a snowy winter wonderland just before Christmas near the NationalCenters for Coastal Ocean Science Kasitsna Bay Laboratory in south-central Alaska. However, the heavy snow also sank two old, 50-foot fishing vessels in nearby Jakolof Bay, when one vesselcapsized on top of the other. The U.S. Coast Guard oversaw salvage operations in mid-Januaryto raise the vessels, but the complicated effort took four days to accomplish. 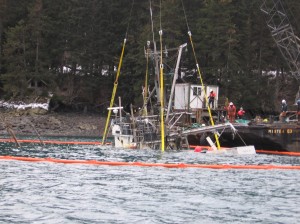 The top deck is the only visible part of a sunken fishing vessel in Jakolof Bay, Alaska. The U.S. Coast Guard raised the boats - sunk in a snowstorm - to reduce environmental damage.

Kasitsna BayLaboratory supported the salvage effort by providing housing for the Coast Guard crew, which enabledthem to stay near the operations rather than having to return across Kachemak Bay to their baseeach day. Removing the sunken boats prevented more diesel oil from leaking into the bay andthreatening to contaminate local oyster farms.