In April 2014, NCCOS-funded scientists deployed two Environmental Sample Processors, two research vessels, five autonomous underwater vehicles, and five drifters in the ocean around San Pedro Bay, off Southern California, seeking signs of harmful algal blooms (HABs). Not long after deployment, this high-tech armada detected a large phytoplankton bloom that included the diatom Pseudo-nitzschia and its toxin, domoic acid. The instrument array made it possible to determine that the bloom was initiated by a diatom seed population residing in a deeper water layer offshore. Upwelling brought this seed population, along with nutrients from sewage outfalls, into well-lit surface layers, where the bloom developed. 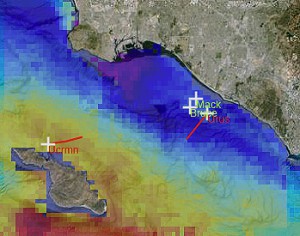 This satellite image shows the temperature of the ocean surface in and around San Pedro Bay on April 2, 2014. The purple and blue areas show an upwelling of cold water near the north end of the bay. The red lines show the courses of underwater gliders. The white crosses labeled "Mack" and "Bruce" indicate the locations of Environmental Sample Processors that are being used in the ECOHAB experiment. Credit: © 2014 MBARI.

2014 marks the third of a five year NCCOS-funded Ecology and Oceanography of Harmful Algal Blooms (ECOHAB) project comparing HAB 'hotspots' off southern and central California. The short-term goal is to determine the role nutrients from different sources play in fostering HABs. Comparing stimulation of HABs by nutrients in upwelled water with nutrients from human activities, such as urban runoff and ocean sewage disposal, may lead to HAB or toxin reduction strategies. The long-term goal of the project is to build computer models that will predict toxic blooms from remote sensing images in collaboration with NASA-funded investigators.