Home > Explore News > Hardwiring Hydrography: A Note from the Field

Hardwiring Hydrography: A Note from the Field 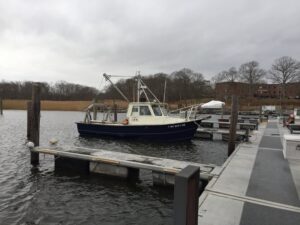 The R/V Pritchard, still docked, while the crew tries to get a 20 year old computer system to run. Credit: NOAA

I traveled up to Old Saybrook, CT last week to help NOAA's academic partners from Stony Brook University conduct a sidescan and multibeam SoNAR survey of the Long Island Sound. This is a multi-year project for creating benthic habitat maps for coastal zone management and marine spatial planning of the Long Island Sound. This data can provide resource managers with vital environmental information for planning big infrastructure projects that connect communities from Long Island to Connecticut, such as routing fiber optic cables and pipelines across the seafloor that least impact the marine habitats.  I have been involved with mapping the Long Island Sound on board NOAA hydrographic research vessels since 2012, training the survey teams on processing sonar imagery and understanding more about the benthic ecology of the seafloor. My recent trip with Stony Brook was a voluntary effort to help professor Roger Flood and his captain get the University's boat R/V Pritchard's  SoNAR equipment up and running, and advise the crew on NOAA's standards for data collection. However, I soon realized that this project needed someone more like a hacker than a hydrographer to help out.

The two computers that run the multibeam system were vastly different: one was running Windows XP from the early 2000's and the other was a Sun System Computer running Unix from the mid 1990's, and the two computers didn't like each other. The Sun Computer did not even have a USB drive, and so an ethernet network had to be set up. There were many hours spent trying to figure out the right syntax for the commands to transfer data from one computer to the other. When we attached the sidescan cable to the PC and weren't getting any data, there was no tech support hotline to call since the company went out of buisness almost 20 years ago. So we had to take the computer apart and literally dust off the cards from the machine and put it back together. Mind you, it's 40 degrees Fahrenheit outside on the Connecticut River in December, inside the cabin of a boat about the same size of my cubicle. 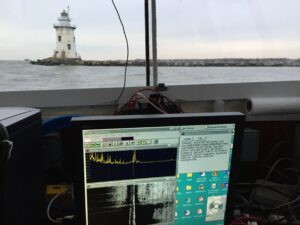 Sidescan SoNAR finally being collected as the R/V Pritchard approaches the entrance to the Connecticut River by the Saybrook Breakwater Lighthouse in Old Saybrook, CT. Credit: NOAA

By the fourth day, we finally left the dock and started testing the sonars and collecting calibration data when at about 5:00 pm we got a National Weather Service alert for a sever snow storm heading to the area. The captain called the calibration tests off and we headed back to the dock, while I was working on the deck outside covering equipment with tarps to get ready for the snowstorm. After we tied back up, I headed to the Amtrak station to catch my Northeast Regional train all the way back to DC. The R/V Pritchard is still out collecting data (hopefully) as I write this letter and will be sailing until the Christmas break, but I will keep checking in with their progress and try to help process and quality control the data from my toasty little cubicle. It was a good experience for me to learn how to troubleshoot and work on older computer systems but also glad that I could give a hand on or below the deck of the boat. Wish them luck out there!