Since mid-July, a large red tide has lingered off the Gulf Coast of Florida, slowly drifting southeasterly towards Florida's southwest coast. The bloom is present throughout the water column with highest concentrations near the bottom. Models and past experience show that the surface and bottom waters move in different directions and near shore Karenia can originate from upwelling bottom water blooms, necessitating tracking of the bloom both at the surface and at depth. Satellite remote sensing can be used to track the bloom in near surface waters, but only gliders or ships can sample at depth. 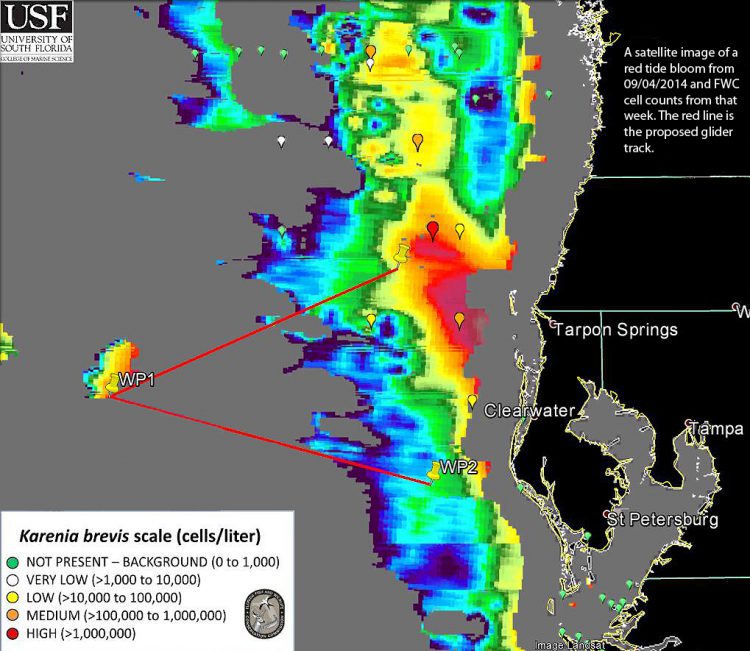 A satellite image of a red tide bloom from September 4, 2014 based on Florida Fish and Wildlife Conservation Commission (FWC) cell counts. The red line is the planned USF glider track. (Courtesy USF College of Marine Science and FWC)

In August, NCCOS provided Event Response Program funding to deploy one of two autonomous robotic underwater gliders to track the red tide bloom. Recovered early to conserve battery power when it was clear the bloom was moving slowly, a repeat launch will provide further updates on the bloom's progress. This second deployment is 'attempting to map out the offshore extent along the bottom, as this is a harbinger of the future," says lead project scientist Dr. Robert Weisberg of the University of South Florida. The glider track is from off North Pinellas County (St. Petersburg) to the 40 meter depth isobath and back to Central Pinellas County. Deployed on September 8, the glider is presently receiving data.

The glider results, along with other information, support predictions of bloom progress provided by the University of South Florida to the Florida Fish and Wildlife Research Institute, other state and local agencies, and tourism businesses.

Partnerships: Bringing Scientists and Resource Managers Together to Explore Opportunities for Using Fisheries Acoustics in the Southeast US